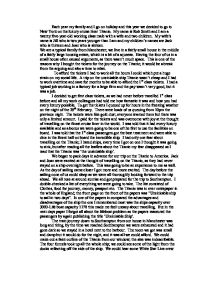 Each year my family and I go on holiday and this year we decided to go to New York on the luxury cruise liner Titanic.

Each year my family and I go on holiday and this year we decided to go to New York on the luxury cruise liner Titanic. My name is Rob Smith and I am a twenty five-year-old working class male with a wife and two children. My wife's name is Jill who is two years younger than I am and my children's names are Jack who is thirteen and Joan who is sixteen. We are a typical family from Manchester; we live in a fairly small house in the middle of a fairly large housing estate, which is a bit of a squeeze. Having the four of us in a small house often caused arguments, as there wasn't much space. This is one of the reasons why I bought the tickets for the journey on the Titanic; it would be a break from the arguing and also a time to relax. To afford the tickets I had to work all the hours I could which put a huge strain on my social life. A trip on the unsinkable ship Titanic wasn't cheap and I had to work overtime and save for months to be able to afford the 1st class tickets. I had a typical job working in a factory for a large firm and the pay wasn't very good, but it was a job. I decided to get first class tickets, as we had never before travelled 1st class before and all my work colleagues had told me how fantastic it was and how you had every luxury possible. To get the tickets I queued up for hours in the freezing weather on the night of the 29th February. There were loads of us queuing from 10pm the previous night. The tickets were like gold dust, everyone wanted them but there was only a limited amount. I paid for the tickets and was overcome with joy at the thought of travelling on the finest cruise liner in the world. ...read more.

We had a few drinks and a smoke or two, we stayed in their until about 11:30pm and them disbanded and made our own way back to our cabins. I decided to take a walk around the ship to clear my head of the drink that I had just had. The next thing I remember was a shudder on the ship, we were told that it had something to do with the engines and there was nothing to worry about. I went back to my cabin to talk to the rest of the family about what had happened. Within minutes there was a knock on the cabin door and a shout of "put your lifejackets on and go onto deck". My wife asked what was going on and the reply she got was "I'm sure its nothing to worry about love just a precaution". We did as we were told and headed onto the deck. Not many people on deck knew what was going on, but there was a rumour going around about a large iceberg hitting the side of the ship. The temperature was so cold that we decided to head into the hall with the rest of the passengers to try and keep warm in front of the fire. I saw several of the White Star Line with worrying looks on their faces so I asked one of the passing crew members what was going on, his response was "nothing to worry about", I could tell that he was lying because of the expression on his faces. The atmosphere in the room was relaxed and everyone was talking loudly. The ship band was playing a slow gentle tune. Ten minutes or so later their was a call for the women and children to get to the nearest lifeboat. They began to be loaded into lifeboats and it was at that point that we were told that the ship was slowly sinking. ...read more.

I spent a minute or two just standing there just hugging them. Their was a lot of shouting and a lot of the people looked happy to see their loved ones, but others just sat in a corner and cried at the thought of losing their loved ones. I remember seeing a little boy, who was looking around for his parents, I went over and asked him if he could see his parents he just stared at me blankly. I asked him again if he could identify his parents but all he just stood there shivering and said nothing. I went off to get some help but when I returned the boy was walking off with a young couple, this brought a smile to my face as I was relieved that the boy still had his parents unlike the vast number of people who had lost someone they love. We were taken to dry land by the Carpathia and were all checked over for hypothermia. Luckily we were all fine. The next day we were sent back to England, we had to endure the gruelling journey home to our small cramped home. I think that we were all lucky to escape the Titanic in good health but I will be writing a strong worded letter of my disapproval to the White Star line stressing our ordeal. I think the White Star line crew should have been prepared for the disaster by receiving formal training on how to load the lifeboats quickly and safely without them loosing control of the situation. In my opinion I think the lifeboats should have been filled to the total capacity and the Titanic should have been equipped with enough lifeboats to hold the capacity of the ship. I have been told that the Titanic had received several iceberg warnings and should have taken precaution whilst crossing the Atlantic. In my opinion the captain should have slowed the ship down instead of speeding it up, as that was the vital mistake which cost the lives of hundreds of passengers. This is my statement about the sinking of the Titanic. ...read more.