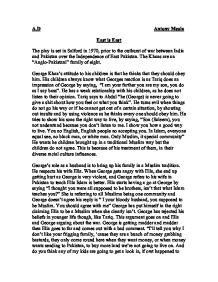 A.D Antony Meola East is East The play is set in Salford in 1970, prior to the outburst of war between India and Pakistan over the Independence of East Pakistan. The Khans are an "Anglo-Pakistani" family of eight. George Khan's attitude to his children is that he thinks that they should obey him. His children always know what Georges reaction is as Tariq does an impression of George by saying, "I am your farther you are my son, you do as I say bass". He has a weak relationship with his children, as he does not listen to their opinion. Tariq says to Abdul "he (George) is never going to give a s**t about how you feel or what you think". He turns evil when things do not go his way or if he cannot get out of a certain situation, by shouting out insults and by using violence as he thinks every one should obey him. ...read more.

And do you think any of my kids are going to get a look in, if owt happened to you?" George then results in violence and grabs Ella violently by her hair and pulls her to the ground. He kicks and beats here. George comes back by saying "you baster b***h! You call me pig, you pucker, you talk to me like this again I b****y kill you b***h, and burn all your baster family when ypu sleep" this is not a nice thought and he is trying to scare Ella, and is showing her the consequences if she does not follow Georges way of living. George believes in the Muslim faith, he wants his children to be accepted into the Muslim community. He believes Pakistan is better than England but he claims he came over to England to start his new life. As Sajit had not been circumcised George found this a disgrace. ...read more.

The children are not sure what race they are. They have an argument saying if they were Anglo-Indian, Eurasian, English or Pakistani. There is no right answer so Maneer just ends the argument with "no one round here thinks we're English we're the Paki family who run the chippy." This shows they will always be labeled. Racial tolerance and integration is needed, George is certainly r****t, like Mr Moorhouse. It is important they reject his values, as the children would be free and marry who they want, and they could live their own lives. They could choose what they wanted to be when they grow up, as George wanted Saleem to be an engineer but it is clear he wanted to do something with art. It would be more convenient if the children made their own decisions. Abdul says "Things will change" Implying there is going to be a better life for the Khan's. It also suggests that the rest of the children will have the freedom to have the choice like Maneer or Tariq. ...read more.