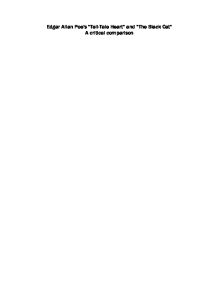 Edgar Allan Poe's "Tell-Tale Heart" and "The Black Cat" A critical comparison Edgar Allan Poe's main focuses in his writings are horror, fantasy, and murder, with the theme of death visited in most of his works. His many writings reflect an imagination that most of his readers could experience when dreaming at night. Poe takes the subject matter death a step further than the simple act and explores the processes and avenues of death. This form of morbidity that is brought throughout Poe's stories usually involves the main character getting rid of one's burden, to one degree or another. Nearly all of his works consisted of variations of this single theme of dark and dreary death. In addition, most of his stories involve an individual who is forever haunted by their reactions to the one thing that they wanted to get rid of. In the stories "The Tell Tale Heart" and "The Black Cat" we see this theme presented in a very powerful sense. Both the "Tell Tale Heart" and "The Black Cat" involve the narrator's inner torment to his selfless act of violence. The focus on the narrator and the theme of the story is strongly concealed with the characters need to be rid of something, but yet continuously being haunted by that very something, even after it has been disposed of, presenting us with what Poe termed "spirit of perverseness." ...read more.

(Poe, 1843) The similarity between the denial by the narrator of his superstitions, and way the narrator in "The Tell Tale Heart" denies that he is insane in hearing the heart beat, the reader becomes more aware of the narrators superstitious beliefs in the story. "The Black Cat" is the second of Poe's look into the study of domestic violence and guilt following that of "The Tell-Tale Heart." This story does not deal with premeditated murder as "The Tell-Tale Heart" does. The reader is told that the narrator appears to be a happily married man, who has always been exceedingly kind and gentle, "My tenderness of heart was even so conspicuous to make me the jest of my companions." (Poe, 1843) He attributes his downfall to the "Fiend Intemperance" (Poe, 1843) and "the spirit of perverseness." (Poe, 1843) The term perverseness, as he believes, is "...one of the primitive impulses of the human heart."(Poe, 1843) "Who has not, a hundred times, found himself committing a vile or a stupid action for no other reason than because he knows he should not?" (Poe, 1843) The narrator's continuous perverseness provides his personal justification for the unfathomable acts upon which he commits. This perverseness is shown in the multiple occasions of which he uses physical violence, the killing of both the first cat, Pluto, and his wife. ...read more.

In "The Tell-Tale Heart" the narrator is driven to madness, hearing the truth in the heartbeat that he assumes the officials can hear. "They heard!-they suspected!-they knew!-they were making a mockery of my horror!-this I thought, and this I think." (Poe, 1843) This perverseness is clearly overtaking the man and the guilt that he felt, the haunting he experienced, had not ended with the murder and removal of the "eye." The truth of who the narrator really was could not be escaped. This was also seen in the final words by the narrator in "The Black Cat". "The corpse, already greatly decayed and clotted with gore, stood e***t before the eyes of the spectators. Upon its head, with red extended mouth and solitary eye of fire, sat the hideous beast whose craft had seduced me into murder, and whose informing voice had consigned me to the hangman. I had walled the monster up within the tomb!" (Poe, 1843). Both of the men in the stories tried placing the blame for their evil actions and thought onto something else. Once this blame was placed, each man felt he could be rid of the feelings he had by removal of what he felt was the cause. Their perverseness drove them to believe that if this thing that blame was laid upon was removed, they would be free. But in reality they were trying to be free of something that could not be escaped... ...read more.