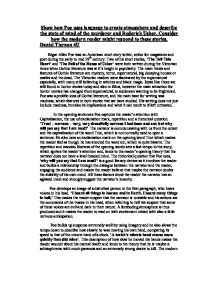 Show how Poe uses language to create atmosphere and describe the state of mind of the murderer and Roderick Usher. Consider how the modern reader might respond to these stories. Daniel Tiernan 4U Edgar Allen Poe was an American short story writer, editor for magazines and poet during the early to mid 19th century. Two of his short stories, 'The Tell Tale Heart' and 'The Fall of the House of Usher' were both written during the Victorian times when Gothic literature was at it's height in popularity. The main thesis and features of Gothic literature are mystery, terror, supernatural, big decaying houses or castles and the dead. The Victorian readers were fascinated by the supernatural especially, with many still believing in witches and black magic. Ideas like these are still found in horror stories today and also in films, however the main attraction for horror movies has changed from supernatural, to audiences wanting to be frightened. Poe was a prolific idea of Gothic literature, and his main base for writing was madness, which features in both stories that we have studied. His writing does not just include madness, but also its implications and what it can result to if left untreated. In the opening sentences Poe captures the reader's attention with Capitalisation, the use of exclamation mark, repetition and a rhetorical question. 'True! - nervous - very, very dreadfully nervous I had been and am; but why will you say that I am mad?' The narrator is communicating with us from the outset and the capitalisation of the word True, which is not normally used to open a sentence. He also uses an exclamation mark on the opening word True which makes the reader feel as though he has shouted the word out, which is quite bizarre. The repetition and staccato likeness of the opening words sets a fast tempo to the story, which ignites the reader's attention and, lends to the reader's opening theory that the narrator does not have a level headed mind. ...read more.

It is fear-provoking as it suggests that we will be followed before we die and be sucked into a hellish vacuum. The modern reader could link this idea with the infamous Grim Reaper. He is a legend that is supposed to take us from this earth to the afterlife. Poe raises the tempo of the story to an electric climax describing the beating of the old man's heart. 'It grew quicker and quicker, louder and louder every instant.' This use of repetition is demonstrating the old man's fear and replicating the beat of his racing heart, and so we read each word like on heart beat. The raise in tempo of the Old man's heart is relative to the raise in the narrator's fury. 'It increased my fury, as the beating of a drum stimulates the soldier into courage.' This suggests that he feels that he is being encouraged from a higher power, and his obeying orders (perhaps voices in his head). In addition it is saying that his cause is just and he is innocent like a soldier in a just war. When the narrator murders the old man, Poe is quite vague about the details. Much is left to the imagination of the reader after reading the description of how he died. 'I dragged him to the floor, and pulled the heavy bed over him.' For the modern reader this would not be satisfactory as nowadays we watch films with much more graphic details, and need to clearly picture how the murder was committed. The actual murder itself is an anti-climax. In a manner if fact fashion, the narrator 'dismembered the corpse. I cut off the head and the arms and the legs.' This makes the reader wonder if the narrator has a conscience at all as he is able to do this without a hint of guilt, as he mutilated a corpse. ...read more.

back to see a 'blood red moon, shining through a crack in the house' Thus symbolising the death of the house of Usher. This is very eerie and metaphoric as not only has the House of Usher fallen but so has the ancient family line. The suspense is maintained to the very end of the story when Poe uses personification 'Long tumultuous sound, like the voice of a thousand waters' when he describes how the lake entombs the House and all its occupants Whilst Poe is studied at school for academic purposes, I do not think that his books would be the first choice for the modern reader who is reading for pleasure. This is for many reasons. Firstly, the language used is very sophisticated and antiquated, and as in the 'The Fall of the House of Usher' large tracts of literature are used as a device to increase tension. The modern reader has to have lots of patience to fully understand Poe's writing and a high level of literacy is assumed by the author. Modern novels are much less literary and a much more basic vocabulary used. At the same time the modern reader expects more graphic details of murders than is provided in either the 'Tell-Tale Heart or The Fall of the House of Usher' Poe writes in such a way that much is left to the reader's imagination and this is unsatisfactory nowadays when so much can be shown to the modern reader via other genres such as film and television. like music Moreover both of these novels are very much a product of Victorian times with their emphasis on night time terrors which reflected the beliefs of society at that time. Today's society tends to dismiss these beliefs as old fashioned and irrelevant. However Poe's writing is very skilful in his use of various techniques and I admire him for that, but I strongly feel that he would not be such a successful writer if he was alive today. . ...read more.