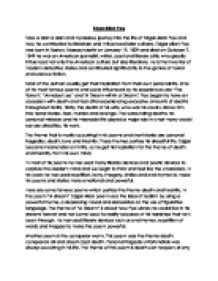 Edgar Allan Poe was born in Boston, Massachusetts on January 19, 1809 and died on October 7, 1849 he was an American journalist, writer, poet and literary critic who greatly influenced not only the American culture but also literature.

EdgarAllan Poe Take a dark a dark and mysterious journey into the life of Edgar Allan Poe and how he contributed to literature and influenced later cultures. Edgar Allan Poe was born in Boston, Massachusetts on January 19, 1809 and died on October 7, 1849 he was an American journalist, writer, poet and literary critic who greatly influenced not only the American culture but also literature. He is the inventor of modern detective stories and contributed significantly to the genres of horror and science fiction. Most of the authors usually get their inspiration from their own personal life. One of his most famous poems and works influenced by his experiences are "The Raven", "Annabel Lee" and "A Dream within a Dream". Poe began to have an obsession with death and fear after experiencing excessive amounts of deaths throughout his life. ...read more.

Here are some famous poems which portray the theme death and insanity. In the poem "A dream" Edgar Allan poem uses the idea of realism by using a powerful theme, a depressing mood and elaborates on the use of figurative language. The theme of "A Dream" is about how Poe wishes he could live in his dreams forever and not come back to reality because of his hardships that he's been through. He has used literary devices such as end rhymes, repetition of words and imagery to make the poem powerful. Another poem is the conqueror worm. This poem uses the theme death conquerors all and about crypt death. Personal tragedy unfortunately was always occurring in his life. The theme of this poem is death can happen at any time and death conquers all. ...read more.

His gothic style works are mostly focusing on the psychology of human actions rather than spiritual influences. His works has influenced many famous people today like Stephen King in making horror and thriller movies such as "IT" and "Pet Sematary". Poe's detective stories have influenced Sir Arthur Conan Doyle in his Sherlock Holmes stories. Without Edgar Allan Poe you would have never heard of or seen detective stories or movies. Poe is still popular today and loved by many people. This is a short music video of how edgar alln poe has influenced the art of music. Although he has already passed away, Edgar Allan Poe is still a well loved mystery writer in history. He has influenced many famous people and his works are still admired until today. Poe influenced not only writers today but also the art of music. Poe is also remembered as the Stephen King of his time and the Tarantino of traditional literature. ?? ?? ?? ?? ...read more.