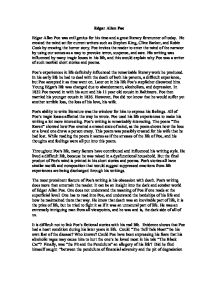 Edgar Allan Poe Edgar Allan Poe was evil genius for his time and a great literary forerunner of today. He created the mind set for current writers such as Stephen King, Clive Barker, and Robin Cook by creating the horror story. Poe invites the reader to enter the mind of the narrator by using our senses as a way to provoke terror, suspense, and awe. His writing was influenced by many tragic losses in his life, and this would explain why Poe was a writer of such morbid short stories and poems. Poe's experiences in life definitely influenced the remarkable literary work he produced. In his early life he had to deal with the death of both his parents, a difficult experience, but Poe accepted it as time went on. Later on in his life Poe's stepfather disowned him. Young Edgar's life was changed due to abandonment, alcoholism, and depression. In 1832 Poe moved in with his aunt and his 11 year old cousin in Baltimore. ...read more.

Poe's stories all have similar motifs and composition that would suggest suppressed emotions from life experiences are being discharged through his writings. The most prominent feature of Poe's writing is his obsession with death. Poe's writing does more than entertain the reader. It can be an insight into the dark and somber world of Edgar Allan Poe. One does not understand the meaning of Poe if one reads at the superficial level. One has to read into Poe, and understand the hardships of his life and how he maintained them that way. He knew that death was an inevitable part of life, it is the price of life, but he tried to fight it as if it was an unnatural part of life. He was an extremely intriguing man from all viewpoints, and he was and is, the dark side of all of us. It is difficult not to link Poe's fictional stories with his real life. ...read more.

His ability to tap into humankind's deepest fears and his consistency in portraying such intriguing and captivating themes is what has kept the work of Poe timeless. In short, Edgar Allan Poe has created many great stories for us. He liked to illustrate the dissolution of an individual's mind and body, as he had suffered it himself for quite a long time. He thought death is unavoidable, because he experienced keenly deaths all around him and its threat on his own life. He was obsessed by the loss of love of ideal women, for he had the same experience in life. Now, we can understand why Poe had a tendency of choosing such themes. Poe is an author of the inner world and his writings are his psychological autobiography to some extent. In this respect, Poe pioneered a new field in literature. He is the first one who focused on man's mental and spiritual activities, and his writings have deep influence on many of later writers. ...read more.