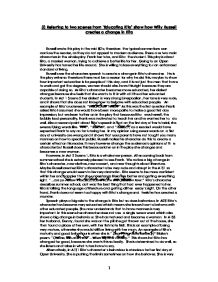 3) Referring to two scenes from 'Educating Rita' show how Willy Russell creates a change in Rita Russell wrote this play in the mid 80's; therefore the typical conventions can confuse the reader, as they do not appeal to modern audience. There are two main characters in the whole play. Frank her tutor, and Rita the student. This play is about Rita, a married woman, trying to achieve a better life for her. Going to an Open University has turned her life around. She is willing to lose everything for an enhanced standard of living. Russell uses the characters speech to create a change in Rita's character. He is the play writer so therefore there must be a reason for why he did this; maybe to show how important education is for people of this day, and it is not just the men that have to work and get the degrees, women should also have this right because they are capable of doing so. As Rita's character becomes more educated, her dialect changes because she feels that she wants to fit in with all the other educated students. In Act 1 Scene 2 her dialect is very strong Liverpoolian, her tone is very rude, and it shows that she does not know how to behave with educated people. An example of Rita's rudeness is "What am I? ...read more.

You do not want to give your tutor the impression that "I have no manners" or "I don't know why I am taking this course". On your first day of university you should be confident and this is what Rita was lacking. Even though it may come across that she is very confident using swears words and saying how she feels, this is called bravery. If she would have been more confident within herself she would not have to turn to bravery and pretend to be someone she is not. An example of no self confidence is "If I pack the course in I'll post it to y'". Russell makes Rita's character have no self confidence in A1S1 so that after summer school the change would seem to be more effective and have an impact on the audiences thoughts and feelings about the situation. The way Russell develops situations also has an effect on how Rita's character speaks and behaves. Maybe if Russell planned some major situation in a different way, Rita might not come across rude and arrogant in A1S1. As Rita enters Franks door is rather stiff. Maybe if Russell did not make the door stiff Rita would not have the opportunity to say anything that may sound rude. Rita's entrance shows a lot about her character. "I'm comin' in, aren't I? It's that stupid bleedin' handle on the door. ...read more.

It has a very good storyline that many people of there mid 40's can relate too. Russell succeeds in creating a changed in Rita's character through speech, behaviour and the way situations are developed. As a reader I feel that the person who Rita was closest to was not too impressed by her change. However, Rita was enthusiastic and very eager to learn and it shows that she is willing to lose everything to earn a more stabilised life for herself. Also this is reinforcing the point that education can make people happier as it is leading you into a successful future. As a reader I get the impression that Frank is not to pleased with Rita's change as further on in the play he says "...from now on I shall insist upon being called Mary, Mary Shelley - do you understand that allusion, Rita?" From this quotation I understand that because Rita's character has changed so much, Frank blames himself that giving her an education and recommending on going to summer school he has created a monster. Rita still has the same personality but she is now speaking and acting like an educated woman. I feel that the change was important to take place so that for readers to understand both sides of emotions and feelings for education and love. Referring to, Act 1 scene 2 and Act 2 scene 1 in Educating Rita, Willy Russell creates a change in Rita's character by changing the characters speech, the way the characters behaviour, and the development of situations between the two characters. ?? ?? ?? ?? 1 ...read more.