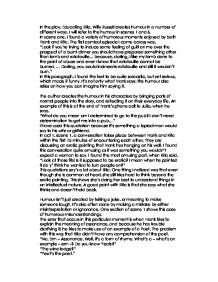 In the play, Educating Rita, Willy Russell creates humour in a number of different ways. I will refer to the humour in scenes 1 and 6. In scene one, I found a variety of humorous moments enjoyed by both Frank and Rita. The first comical episode I came across was, "Look if you're trying to induce some feeling of guilt on me over the prospect of a burnt dinner you should have prepared something other than lamb and ratatouille... because, darling, I like my lamb done to the point of abuse and even I know that ratatouille cannot be burned. ... Darling, you could incinerate ratatouille and still it wouldn't burn." In this paragraph, I found the text to be quite sarcastic, but yet serious, which made it funny. It's not only what Frank says; the humour also relies on how you can imagine him saying it. The author creates the humour in his characters by bringing parts of normal people into the story, and reflecting it on their everyday life. ...read more.

This shows she's doing her best to understand things in an intellectual nature. A good point with Rita is that she says what she thinks and doesn't hold back. Humour isn't just created by telling a joke, or meaning to make someone laugh. It's also often done by making a mistake by either misinterpretation or ignorance. One section of scene 1 shows this case of humorous misunderstandings. The error that occurs in this particular moment is when Frank tries to explain the meaning of assonance, and because he has trouble clarifying it; he tries to make use of an example of a Poet. The problem with this was that Rita didn't have any comprehension of the poet. "No. Erm - Assonance. Well, it's a form of rhyme. What's a - what's an example - erm -? Do you know Yeats?" "The wine lodge?" "Yeat's the poet." "No." Her mistake was diminutive and insignificant, but still noticeable. ...read more.

Frank is inviting Rita out to lunch, but the offer triggers Rita's memory, as she has left one of her customers in the Salon with chemicals on her which can cause unfortunate results. "Christ- me customer. She only wanted a demi-wave - she'll come out looking like a friggin' Muppet." I found this downright amusing. I think this is because of the context used. Her use of speech is once again very 'common', with the words she uses, like friggin' and Muppet. Willy Russell has created these characters in a very clever way. The way he thought about the use of language for both characters was imaginative, and he has stressed it to the maximum effect. In conclusion, I have found this play to have a different use of humour in each particular part, but yet it has been used in knowledgably and realistic way. His play is one that you can actually use your imagination to know and see the characters, and that's what I find to be the most important thing for any play, especially for Educating Rita. ...read more.