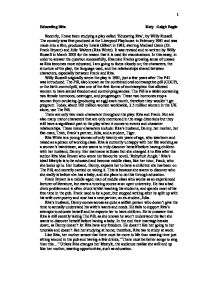 Educating Rita Katy-Leigh Bogin Recently, I have been studying a play called 'Educating Rita', by Willy Russell. The comedy was first produced at the Liverpool Playhouse in February 1981 and was made into a film, produced by Lewis Gilbert in 1983, starring Michael Caine (Dr. Frank Bryant) and Julie Walters (Rita White). It was revised and re-written by Willy Russell in March 2003 for the reason that it is used for examinations. In this essay, in order to answer the question successfully, Examine Franks growing sense of unease as Rita becomes more educated, I am going to focus closely on; the characters, the structure of the play, the language used, and the relationships shared between characters, especially between Frank and Rita. Willy Russell originally wrote the play in 1981, just a few years after The Pill was introduced. The Pill, also known as the combined oral contraceptive pill (COCP), or the birth-control pill, was one of the first forms of contraception that allowed women to have sexual freedom and control pregnancies. The Pill is a tablet containing two female hormones, oestrogen, and progestogen. These two hormones stop a woman from ovulating (producing an egg) each month, therefore they wouldn't get pregnant. Today, about 100 million women worldwide, 3.5 million women in the UK alone, use The Pill. There are only two main characters throughout the play: Rita and Frank. But are also many minor characters that are only mentioned in the stage directions but they still have a significant part to the play when it comes to events and character relationships. These minor characters include: Rita's husband, Denny, her mother, her flat-mate, Trish, Frank's partner, Julia, and a student, Tiger. Rita White is a young woman of only twenty-six years of age, who was born and raised as a person of working class. Rita is currently unhappy with her life working as a women's hairdresser, as she wants to truly discover herself before having children with her husband, Denny. ...read more.

She tells Frank that Denny is afraid that she is trying to break away and Frank links Rita's life with Forster's writing. In Scene 4, Rita turns up to without her essay. Frank starts to be sarcastic with Rita, making up excuses for why she hasn't got it but he stops when he realises she's upset. "It's burnt." Again, Frank is confused, "Burnt?" Rita explains that Denny found out she was still on The Pill, therefore, he burnt all her books. Rita doesn't understand why her husband just can't let her get on with her learning. Frank asks if Denny thinks that she is having an affair with him, her response is, "Oh, go' way. You're just me teacher." He then asks, "Do you love him?" Rita explains now that she feels that Denny sometimes wonders where the girl he has married has gone to and that he buys her presents hoping she will return, "she's gone, an' I've taken her place." This shows that Rita understands that she is changing, but she is happy with this and she is finally beginning to find herself. At the end of Scene 5, Frank wants Rita to meet Julia, and invites her over to his house for a dinner party. He also asks her to bring along Denny, if she wants. Rita is nervous and asks him why he is inviting her and he replies, "Because you might enjoy it." Rita's surprised by this as nobody has really invited her to a dinner party before. The Scene ends with Rita asking Frank, "What shall I wear?" At the beginning of Scene 6, Frank is disappointed that Rita didn't turn up for his party and Rita explains that she had a fight with Denny about it. Rita tells Frank that she spend all evening trying on dresses and thinking of things to say at the party. Rita seriously says that she brought the wrong sort of wine and she didn't want to be seen as funny. ...read more.

By Frank buying her one "some time ago" shows that he believed she was able to pass exams even though she had a long way to go. He refers to Rita as "an educated women friend of mine." This shows he has accepted that friends is all they are, and that's all they will ever be. But deep down he still wishes that they could have been more, as he still loves her. Rita replies, "All I've ever done is take from you. I've never given anything." So the play ends with Rita saying, "Come here, Frank...Sit on that..." The audience hope that she will change her mind and go with Frank to Australia. But she just gives him a haircut, "I'm gonna take ten years off you..." This shows Rita is able to be herself now and the play ends on the warmth returning to their relationship. Throughout the play, Rita and Frank's relationship has many changes. In Act 1, Rita is fully dependent on Frank for her education and Frank is sexually attracted to Rita. Rita doesn't understand this, as she doesn't know how tutors are meant to act. At one point Frank tells Rita he doesn't want to teach her as he realises he will have to change her. He doesn't want to remove her uniqueness as he says it's "valuable." But Rita insists he teaches her because she wants to discover herself through education. The two become very close and share a very good friendly relationship. This changes in Act 2, as Rita is becoming educated now. She changes dramatically and this is clear to the audience. Frank isn't happy with this and describes Rita as his created monster. Towards the end Frank starts to accept he isn't going to get back the Rita he fell in love with. This is shown when he buys Rita a new dress as she finally passed her first exam and is now free to do what she wants. 1 ...read more.