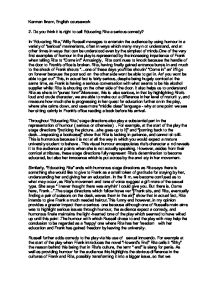 Kamran Ikram, English coursework 2. Do you think it is right to call Educating Rita a serious comedy? In 'Educating Rita,' Willy Russell manages to entertain the audience by using humour in a variety of "serious" mannerisms, often in ways which many may not understand, and at other times in ways that can be understood even by the simplest of minds.One of the very first examples of humour in the play is represented by the increasing impatience of Frank when telling Rita to "Come in!" Amusingly, Rita continues to knock because the handle of the door to Frank's office is broken. Rita, having finally gained entrance bursts in and much to the shock of Frank shouts "...one of these days you'll be shoutin' "Come in" an' it'll go on forever because the poor sod on the other side wont be able to get in. An' you wont be able to get out" This, in actual fact is fairly serious, despite being hugely comical at the same time, as Frank is having a serious conversation with what seems to be his alcohol supplier whilst Rita is shouting on the other side of the door. It also helps us to understand Rita as she is in "purest form".Moreover, this is also serious, in that by highlighting Rita's loud and crude character, we are able to make out a difference in her level of maturity, and measure how much she is progressing in her quest for education ...read more.

The use of verbal comedy through the differing types of language has also enabled Russell to create comedy.For example at the beginning of act two, Rita changes her accent to try and sound more "educated" giving a contrast to her usual colloquial language we have become used to in Act One, "As Trish says there is not a lot of point in discussing beautiful literature in an ugly voice". This shows just how desperate and impatient Rita is to become educated. It is effective in suggesting that perhaps Rita is ashamed of her background and culture when around more middle class people like Frank and her flatmate Trish and that gaining an education in literature is not enough for her,she wants more than that she wants to become a different person. Rita sees education as a destination, a way to escape her unfulfilled life, rather than a signpost in helping her to become a more well rounded person, where she is able to make choices for herself. Frank, however believes that she should stay true to who she is, and remain innocent which suggests that he at times regrets his middle class culture and education, as it has ensured he is not innocent like Rita. Another way in which Russell raises serious points through comedy is by use of Rita's colloquial language, when compared to Frank's way of speaking.For example, "I'm coming in , aren't I? ...read more.

For example, in her society she was brought up believing that " music an' clothes an' lookin' for a feller" were the main qualities of life however, she always had the notion that it was wrong. Hyperbole is also used to show the audience the way in which Rita sees herself as someone who is entertaining but who cannot be taken seriously, for example when she says "I didn't want to come to your house just to play the court jester." This shows that she is angry at her witty personality and emphasises the extent to which she wants to change.Russell also uses antithesis to create humour for example when Rita describes Frank as a "geriatric hippie" . This is effectively highlights Rita's light-hearted nature and her use of the word "hippie" emphasises the fact that Frank has no motivation to change his lifestyle, which may be caused by his depression and the fact he is an alcoholic. In conclusion, Russell's vision for 'Educating Rita' is definitely a humorous one, but he uses many different types of humour to effectively entertain the audience, but to also raise more serious issues at the same time. Russell's use of "serious" humour manges to raise key problems in every day life ,whilst giving the play a light hearted tone, so as to make it interesting for the audience. Indeed, I believe the humour is mostly there to raise more serious issues, and the fact that it appeals to the audience is an added bonus. ...read more.