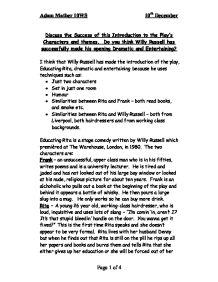 Discuss the Success of this Introduction to the Play’s Characters and themes.  Do you think Willy Russell has successfully made his opening Dramatic and Entertaining?

I think that Willy Russell has made the introduction of the play, Educating Rita, dramatic and entertaining because he uses techniques such as:

Educating Rita is a stage comedy written by Willy Russell which premièred at The Warehouse, London, in 1980.  The two characters are:

Frank – an unsuccessful, upper class man who is in his fifties, writes poems and is a university lecturer.  He is tired and jaded and has not looked out of his large bay window or looked at his nude, religious picture for about ten years.  Frank is an alchoholic who pulls out a book at the beginning of the play and behind it appears a bottle of whisky.  He then pours a large slug into a mug.   He only works so he can buy more drink.

Rita – A young 26 year old, working-class hairdresser, who is loud, inquisitive and uses lots of slang – “I’m comin’ in, aren’t I?  It’s that stupid bleedin’ handle on the door.  You wanna get it fixed!”  This is the first time Rita speaks and she doesn’t appear to be very formal.  Rita lives with her husband Denny but when he finds out that Rita is still on the pill he rips up all her papers and books and burns them and tells Rita that she either gives up her education or she will be forced out of her home and marriage.  Rita wanted to get an education first and then look at her options so then she can decide whether or not she wants a baby so, therefore, she decides to have an education.

The scene is a room on the first floor of a Victorian-built university in the north of England.

Frank decides he needs to earn some extra money, so he agrees to tutor an Open University student who is Rita who has just decided to get an education.  Rita’s entrance to the room is not a normal one; she struggles to get into the room and then the door swings open.

As soon as the play starts, we find out that Frank is an alcoholic.  He has a bottle of whisky hidden behind some books which he takes a large slug of and before Rita enters he is on the phone.  Whilst he is on the phone he mentions the word ‘pub’ four times.

Later on Frank asks Rita what her name is. She says it is Rita even though her real name is Susan.   Frank says that on her admission paper it says Mrs S White.  Then Rita tells him that her real name is Susan but she changed it after reading the book ‘Rubyfruit Jungle’ which was written by Rita Mae Brown.

Rita wanders around the room a lot noticing the large bay window and the nude picture.  She shows that she is inquisitive by asking lots of questions about the nude, religious picture.  In this bit Willy Russell adds a bit of humour:

“Y’ don’t paint pictures like that just so that people can admire the brush strokes, do y’? “

A bit later on Rita shows her slang language

“He gets pissed an’ stands in the street shoutin’ an’ challengin’ death to come out an’ fight.  It’s dead good.  This is totally different from the way Frank speaks for example he says

Before this Rita asks if she can smoke and then when Frank asks her if she wants a drink of Scotch she says:

“Y’ wanna be careful with that stuff, it kills y’ brain cells.”

Like if you smoke you won’t be killing your brain cells.

Rita is not very optimistic.  Whilst she is looking around the room inquisitively, she picks up a book called Howard’s End which she thinks is filthy so she borrows it off Frank and says that if she decides to pack the course in she will post it back to him.  “If I pack the course in I’ll post it to y’.”  Frank seems shocked when she says this and starts asking her why she had decided to enrol onto the course in the first place.  She thinks the book is written by E.M. Foster when it is really written by E.M. Forster.  This is because she sees the brand of lager Fosters so often she assumes that’s who the book is by.

Rita appears to be very lively and confident but when Frank says that she is asking lots of questions she says that she does when she gets nervous.

Rita shows her drink addiction and lack of knowledge again when Frank says:

Frank: “Do you know Yeats?

As soon she hears Yeats mentioned, she immediately thinks of drink again.

There is a clash of cultures when Rita was trying to think of someone Frank could have been named after, she says a name that Frank had never heard of – Elliot Ness the police man who caught Al Capone but Frank would not no anything him as he is totally oblivious to the world around him.  Frank assumed she meant T.S. Eliot and Rita would not know anything about poets.

Rita then shows that she is a quick thinker as she says that she try’s to sell her customers a wig when she messes up people’s hair.  Rita presumes that Frank is the kind of man that would watch documentaries whereas Rita watches light-hearted programs such as ITV.  However of course, Frank wouldn’t watch TV.

Towards the end of the scene Rita seems to be very determined to keep Frank as her tutor.  This is different to earlier in the play when she was saying that she would post the books back to Frank.

In conclusion, I believe Willy Russell has made Act 1 Scene 1 dramatic and entertaining by the use of humour, comparisons and the similarities between himself and Rita.