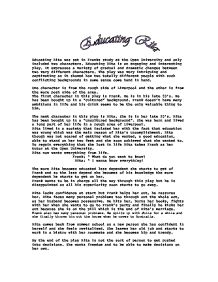 Educating Rita Educating Rita was set in Franks study at the Open University and only included two characters. Educating Rita is an engaging and interesting play. It expresses a variety of gradual and dramatic changes between two very different characters. The play was very intriguing and captivating as it showed how two totally different people with such conflicting backgrounds in some sense come hand in hand. One character is from the rough side of Liverpool and the other is from the more posh side of the area. The first character in this play is Frank. He is in his late 50's. He has been bought up in a "cultured" background. Frank doesn't have many ambitions in life and his drink seems to be the only valuable thing to him. The next character in this play is Rita. She is in her late 20's. Rita has been bought up in a "uncultured background". She was born and lived a long part of her life in a rough area of Liverpool. Rita lived in a society that isolated her with the fact that education was wrong which was the main reason of Rita's uncomplishment. Rita though was not scared of getting what she wanted, a good education, able to stand on her two feet and she soon achieved what she wanted to. ...read more.

She asks Frank if he thinks its erotic but he just mutters that he hasn't looked at it for 10 years and starts doing something. But Rita doesn't give up. "Look at those tits" Frank gets embarrassed coughs as he hides himself in the admission papers. I think that Frank is very shocked by what is happening, as he has never been spoken to in this way especially from someone he hardly knows. Rita has the will to learn very hard and she wants to reach her aim shes serious about education. Frank: "What can I teach you?" Rita: "Everything." Later on in the play she starts to think shes learnt everything. Rita: "I've got what you got Frank, and you don't like it. Frank likes her straight forwardness in Scene 1 but to his disappointment she starts to loose her identity towards the end of the play. "I think you're the first breath of air that's been in this room for years." At the summer school Rita has learned about authors and she meets other students. Frank is very impressed of her abilities. She changes her lifestyle with new clothes and a new hair colour and was also influenced of her flatmate Trish. Trish encourages Rita a lot and she in under her influence. ...read more.

"...I heard one of them saying that as a novel he preferred 'Lady Chatterly' to 'Sons and Lovers.' I thought, I can keep on walking an' ignore it, or I can put him straight." In my opinion the last change in Rita is that she starts to prefer younger people such as Tiger and Trish. I think that when Rita says "they are too young" She might be referring to Frank as old, which is why she doesn't like to spend more time with him. "...I find a lot of people I mix with fascinating; they're young, and they're passionate about things that matter. They're not trapped-they're too young for that. And I like to be with them." In many ways there is a lot of change some for the better, such as Ritas gain in confidence and some for the worse, such as the loss of her individuality. I think that Russell has bought this play together in a good way. I think that Russell is trying to express that classes should not affect people's behaviours or attitude towards others as we see Rita started to ignore Frank. Everyone is equal and people from low or high classes can achieve all they want. In my opinion Rita has a selfish and self concerned personality towards the end of the play. She forgets that only a short period of time ago she was very dependent on the people she is now ignoring. ...read more.