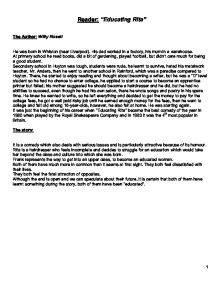 Reader: "Educating Rita" The Author: Willy Rusell He was born in Whiston (near Liverpool). His dad worked in a factory, his mum in a warehouse. At primary school he read books, did a bit of gardening, played football, but didn't care much for being a good student. Secondary school in Huyton was tough, students were rude, he learnt to survive, hated his metalwork teacher, Mr. Anders, then he went to another school in Rainford, which was a paradise compared to Huyton. There, he started to enjoy reading and thought about becoming a writer, but he was a "D" level student so he had no chance to enter college, he applied to start a course to become an apprentice printer but failed; his mother suggested he should become a hairdresser and he did, but he had no abilities to succeed, even though he had his own salon, there he wrote songs and poetry in his spare time. He knew he wanted to write, so he left everything and decided to get the money to pay for the college fees, he got a well paid risky job until he earned enough money for the fees, then he went to college and felt old among 16-year-olds, however, he also felt at home. He was starting again. It was just the beginning of his career when "Educating Rita" became the best comedy of the year in 1980 when played by the Royal Shakespeare Company and in 1983 it was the 4th most popular in Britain. The story: It is a comedy which also deals with serious issues and is particularly attractive because of its humour. Rita is a hairdresser who feels incomplete and decides to struggle for an education which would take her beyond the class and culture into which she was born. Frank represents the way to get into an upper class, to become an educated woman. ...read more.

Finally she wrote a very clever answer to the question of the essay, she wrote that the radio was the best option because as the author said it was a play for voices (not intended for the theatre) so if he had had the radio in his days he would have done it there. SCENE 5: Rita didn't bring her essay because her husband had burnt her books and papers when he found out she was taking contraceptives to avoid getting pregnant. Frank was really sorry, not for the books but for her situation at home. They started talking about her life and he asked if she wanted to leave that course but she said the course was the only thing that made her feel alive and she was not going to quit. Frank offered to go to the pub to go on talking but she said she wanted to talk about Chekhov (she asked why he was considered a comic genius when his book was so sad); Frank took his bottle of whisky (hidden) and filled two glasses. Talking about Chekhov Frank asked her if she had ever gone to the theatre but she hadn't so she suggested going that night and even when Frank didn't like theatre and tried to find excuses (eg.Julia) she convinced him and they went to see an amateur performance of an O. Wilde play (he'd have rather gone to the pubs but as she was so excited he accompanied her). SCENE 6: It was early. Frank goes into his room and starts eating a sandwich when suddenly Rita bursts in, it was her break and she rushed to his place to tell him she had gone to see a real play on a real stage theatre performed by professional actors. It was a Shakespeare's play (Macbeth), she was so excited, it had been fantastic, and she had even bought the book after seeing it! ...read more.

to Australia because of his behaviour, he was going there alone, suddenly he asks her why she was there, she says she came to thank him for entering her for the exam and to tell him he was a good teacher. When she was doing the exam she remembered all Frank had said and realised he was right, her head was full of empty phrases but it was only her fault, she was so hungry that didn't see things clearly, like Trish, she thought Trish was so cool but one night she found her trying to kill herself, it was senseless, she used to eat healthy food to live longer and one day, all of a sudden, decides to stop living. Then she read the first question again, it was one that Frank had taught her about Peer Gynt and decided to write it correctly, she chose to write the right answer because of all Frank had given her so she passed the exam and came back to tell him that he was a great teacher. Frank offered her to go to Australia with him but Tiger had asked her to go to France (she knew he was stupid but had never been abroad) and her mother asked her to be there at Christmas. She didn't know what she was going to do but she would choose, she would make a decision, she could choose now, she had choices. Frank gave her a dress he had bought for her, he was drunk when he bought it but it was intended for an educated woman. Rita finds out that she had always taken from Frank but she has never given him anything so she decides to give him something, she asks him to sit down, she takes some scissors and tells him she is going to take 10 years off him. He sits down really confused. She gives him a hair cut (and cuts his ear). The End Black out ?? ?? ?? ?? 1 ...read more.