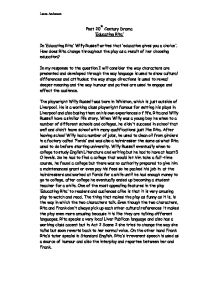 Post 20th Century Drama 'Educating Rita' In 'Educating Rita' Willy Russell writes that 'education gives you a choice'. How does Rita change throughout the play as a result of her choosing education? In my response to the question I will consider the way characters are presented and developed through the way language is used to show cultural differences and attitudes; the way stage directions is used to reveal deeper meaning and the way humour and pathos are used to engage and effect the audience. The playwright Willy Russell was born in Whiston, which is just outside of Liverpool. He is a working class playwright famous for setting his plays in Liverpool and also basing them on his own experiences of life. Rita and Willy Russell have a similar life story. When Willy was a young boy he when to a number of different schools and colleges, he didn't succeed in school that well and didn't leave school with many qualifications just like Rita. After leaving school Willy had a number of jobs, he used to clean oil from girders in a factory called 'Fords' and was also a hairdresser the same as what Rita used to do before starting university. Willy Russell eventually when to college to study English Literature and writing but he had to have at least 5 O levels. ...read more.

Rita's relationship with her husband Denny isn't really the good. The problem with Rita's relationship with Denny is that Denny hates the idea that she is going to university to study literature and all he wants is for her to have a baby, but Rita doesn't want one until later in life. When Denny finds she is still o the pill he goes and gets all her books and burns them all. After that Rita decides to leave him for good so she can concentrate on her education. The reason Rita is dissatisfied with her relationship with Denny is because Denny is depriving her of the education she really wants just for a baby. In Act 1 Scene 1 when Rita is trying to get into Franks office she is so determined to get in she pushes and pushes the door until it opens and when she emerges the first thing she says to Frank is ' I'm comin in aren't I? it's that stupid bleedin handle on the door. You wanna get it fixed.' Frank replies '...Erm yes, I suppose I always mean to...' Rita bites back saying, ' Well that's no good always meanin to, is it? Y should get on with it; one of these days you'll be shoutin 'come in' an' it'll go on forever because the poor sod on the other side wont be able to get in. ...read more.

across, trying to tell him she doesn't want to be the Rita that is charming, delightful and funny she wants to be like Frank and his friends that talk seriously and takes life seriously not someone that is there to make other people laugh. Even though in scene 7 Rita is tempted to go back to her old ways when she see her family in the pub enjoying themselves but Rita sticks with her education and this forces her to make difficult decisions involving her family. " I got home from work and he'd packed me case." here Rita is telling Frank that Denny has kicked her out of her home because of her carrying on with her education and not wanting a baby, even though Rita has the option to go back to him and start a new life with a baby she doesn't she decides to carry on with her education and try and make something out of her life before it is to later for her. I think that the audience would have responded to Rita's decision to leave her husband in Rita's favour because of how badly Denny treat her when they were together. He burnt her books, screamed and shouted at her and also threw her out the house because she wouldn't have a baby. Laura Anderson ...read more.