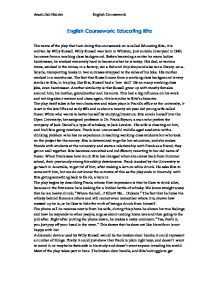 English Coursework: Educating Rita The name of the play that I am doing this coursework on is called Educating Rita, it is written by Willy Russell. Willy Russell was born in Whiston, just outside Liverpool in 1947; he comes from a working class background. Before becoming a writer he was a ladies hairdresser, he worked extremely hard to become what he is today. His dad, at various times, worked in the mines, in a factory, ran a fish and chip shop and also ran a library-on-a-bicycle, transporting books in two suitcases strapped to the sides of his bike. His mother worked in a warehouse. The fact that Russell came from a working class background is very similar to Rita, in his play, like Rita, Russell had a `low skill` life an many working class jobs, even hairdresser. Another similarity is that Russell grew up with mostly females around him; his mother, grandmother and his aunts. This had a big influence on his work and writing about women and class, again, this is similar to Rita's character. ...read more.

The phone call he receives next is from his wife, during this phone he shows his true feelings and how he responds to other people, argues about coming home late and then going to the pub after. Right after putting the phone down, he makes a nasty comment, "Yes, that's it, you just pop off your head in the oven." This shows that he does not like his wife or is not happy with her. A dramatic device used by Willy Russell would be the broken door hands; it could represent a number of things. Firstly it could just show that Frank is plain right lazy, and doesn't want to mend it, or maybe he feels safe in his study and doesn't want anyone invading his world. Most of the play takes part in here. The broken door handle, and Rita's struggle to get through the door, could also represent her struggle in life - it won't be an easy job attending Open University. The erotic painting on the wall shows Rita and Frank's different views, Frank sees it as a work of art, whereas Rita sees it for what it really is, Nudity. ...read more.

The message of the play is, if you really want something, you must work hard and fight for it. This is what Rita had done throughout the play, even with her family laughing at her; in the end she got her degree after working for it. I think that Russell made his play a comedy to make the reader read on as its quiet a funny play in terms of humour, and also as a literary device. Such as when Rita lies about not using contraceptive pills and her husband finds them after smashing in the wall, or maybe even where she oils the door for Franks study. The comedy used is meant to make us remember the statement throughout the play, Rita oiling the door could tell us that she is determined and a thoughtful person. I think that Russell is saying that your education is restricted by your class and upbringing. Not everyone attended university in those days; it was only educated rich people. Whereas today anyone can attend, and pretty much the same thing applies today, if you want something, just work for it, put in the effort and you shall be successful. ?? ?? ?? ?? Asadullah Haider English Coursework ...read more.