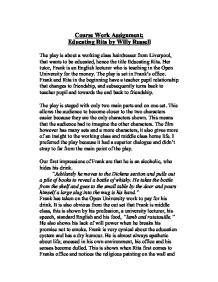 Course Work Assignment: Educating Rita by Willy Russell The play is about a working class hairdresser from Liverpool, that wants to be educated, hence the title Educating Rita. Her tutor, Frank is an English lecturer who is teaching in the Open University for the money. The play is set in Frank's office. Frank and Rita in the beginning have a teacher pupil relationship that changes to friendship, and subsequently turns back to teacher pupil and towards the end back to friendship. The play is staged with only two main parts and on one set. This allows the audience to become closer to the two characters easier because they are the only characters shown. This means that the audience had to imagine the other characters. The film however has many sets and a more characters, it also gives more of an insight to the working class and middle class home life. I preferred the play because it had a superior dialogue and didn't stray to far from the main point of the play. Our first impressions of Frank are that he is an alcoholic, who hides his drink. ...read more.

So he invites Rita to his dinner party, he also feels that she will enjoy meeting new people; he never thinks how Rita would really feel being surrounded by middle class educated people. Rita on the other hand is partly excited about it and also apprehensive. In the end Rita does not go to the party because she thinks she brought the wrong wine, or so she said, and would not be able to converse with Franks middle class friends at their level. "But I don't wanna be charming and delightful: funny, what's funny? I don't wanna be funny, I wanna talk seriously with the rest of you, I don't wanna spend the night taking the piss, comin' on with the funnies because that's the only way I can get into the conversation. I don't want to come to your house just to play the court jester." She thinks that she is a "half-caste" stuck between working and middle class, not quite fitting into either. For Rita Act One ends on a very negative note, her marriage is finished. This came about because Rita's husband Denny wanted a baby and Rita did not, also Denny wanted Rita to stop going to the O.U course. ...read more.

Rita plans to either go to France with Tyson, go to her mothers for Christmas or have a baby. These choices reveal that she is still indecisive. I think Russell's message is that however well together people seem you can't really tell what's going on inside. For example, you could be a well paid businessman or woman who has a spouse, 2 kids, car and a roof over your heads a perfect life, and still want to kill yourself. The play ends on a happy note with a sad undertone. With the friendship between Frank and Rita back to normal, but with Frank's leaving and Trish's suicide attempt ending it as a mix of the two. Russell uses humour to soften the blow that could be caused by tackling class, political and social issues, and the different ways the different classes deal with these issues. The first part of the play is funnier because the differences between Frank and Rita are more prominent. The play ends on a funny note with Rita giving Frank a haircut and cutting him. "She goes across to him and begins to cut his hair. As she gets close to his ear-lobe Frank cries out 'Ouch" ?? ?? ?? ?? ...read more.