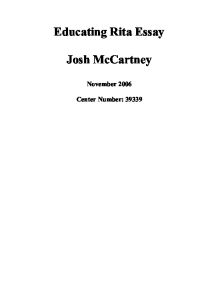 Educating Rita Essay Josh McCartney November 2006 Center Number: 39339 Educating Rita Essay "Y' have to change from the inside, don't y', y'know like I'm doin". Educating Rita is a play by Willy Russell that focuses mainly on the theme of education. The play also touches on the themes of the class system and Willy Russell's own life. The plot is about a 26 year old woman, Rita, who is unhappy about where she is in life. She is a lively, honest and open person. She craves an education because she feels that this will open up more options for her and expand her horizons. She didn't do very well at school because she just followed the crowd but then she realizes she is stuck where she is because of that decision so she makes a concious decision to change from the inside and break out from the crowd and become educated. In the first scene, the audience are introduced to Frank, a professor at the university, and his drinking habits which suggests he is also unhappy with his life because he could drink to escape reality. 'He pulls out a pile of books to reveal a bottle of whiskey'. The audience are also introduced to Rita, who enrols on a course at the Open Universtiy. "Do you get a lot of students like me?" Rita talks to Frank about why she wants to learn and how she wants to break free of her old lifestyle and change completely but a lot of their conversations are confused because of their different cultural and social backgrounds. ...read more.

"Right now there's a thousand things I'd rather do than teach; most of them with you, young lady..." They become confident with each other to and begin discuss personal issues with each other and become quite flirtacious. "'...Gets right on my tits' 'You must show me the evidence'". This shows they are getting on well and that their relationship is developing. An example of this is when Frank accomponies Rita to the theatre. When Rita doesn't show up to the dinner party, their relationship drops but by the end of act 1, they are very good together and compliment each other well; they are able to help each other out and talk at ease with each other. One of the major turning points in the play is the changes in Rita's behaviour, personality and attidute towards life. These changes start to occur at the beginning of second act as a result of her education; at the start she copies everything from everyone she knows - working class people. However she wants to change and be different but she just ends up following a different crowd of friends - 'educated upper class' people. Some of the changes she goes through are conscious decisions she makes to fit in with others, while others she goes through aren't. Rita starts to talk using a 'posh' voice compared to act one where she would use a lot of slang. This shows that she is changing everything to fit in with her knew friends. ...read more.

These changes in Rita affect hers and Frank's relationship greatly; he feels that he no longer knows her and she changes so much she is nothing like the Rita at the beginning, the Rita that Frank became friends with or the Rita that Denny fell in love with. Throughout the play, Rita's character is portrayed through stage directions which builds up a very strong, vivid image in the mind of the reader. 'Rita flounces into the room and walks over to the desk.' 'Rita Bursts into room and dumps her bag on the desk'. Over the course of the play however her changes can be noticed just by examining the stage directions. 'Rita enters and walks slowly across the room'. I think that the points Willy Russel is trying to get across are; to let people know about his own life, there are many autobiographical elements found in Rita's character, for example, he was also a hairdresser before he went back into further education. I think that he was also trying to tell people that they can change their situation and don't just have to accept your position in life, to get people to consider education, to highlight class issues in society that would have been a lot more relevent in the time that Educating Rita was published and to raise awareness that you can change your life if you make a concious decision, like Rita, to do so. Reading this play has made me think about and consider carefully my education; to make the most of it and realise that people can change their position in life. ...read more.