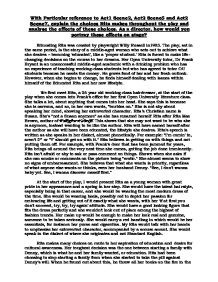 With Particular reference to Act1 Scene2, Act2 Scene5 and Act2 Scene7, explain the choices Rita makes throughout the play and analyse the effects of these choices. As a director, how would you portray these effects on stage? Educating Rita was created by playwright Willy Russell in1985. The play, set in the same period, is the story of a middle-aged woman who sets out to achieve what she desires - becoming 'educated', like a 'proper student.' Rita is forced to make life-changing decisions on the course to her dreams. Her Open University tutor, Dr Frank Bryant is an unsuccessful middle-aged academic with a drinking problem who has no experience of teaching working-class students but who has agreed to tutor OU students because he needs the money. He grows fond of her and her fresh outlook. However, when she begins to change, he finds himself dealing with issues within himself of the Educated Rita and her new lifestyle. We first meet Rita, a 26 year old working class hairdresser, at the start of the play when she comes into Frank's office for her first Open University literature class. She talks a lot, about anything that comes into her head. ...read more.

Going to University was initially a big choice in itself. Going from hairdresser to student was a big step, especially without great results from school when she was younger. It was seen to be irregular for a woman with Rita's lifestyle, at that age, to attend Open University sessions, or even become independent from their other half. She is determined, and tries to absorb everything that Frank says, possessing the right attitude towards become educated. When Frank invites Rita to a dinner party at his house, "full of educated people," Rita gets as far as the steps to his front door then turns around and leaves before being seen. The door may metaphorically be the entrance to becoming educated. All the educated people are on the opposite side to Rita, but she is not able to open the door and join them. This may metaphorically be her either not being ready or prepared to become Educated Rita, or because she isn't yet prepared to lose everything that she was. Not at this stage anyway. Rita has changed dramatically by the end of the play. Rita has quit hairdressing to work in a bistro, recommended by her flatmate Trish. ...read more.

She also realises, through the tragic suicide attempt of her friend and flatmate Trish, that literature and the arts can certainly not provide all the answers. My personal opinion of Rita is quite high. She is a resolute young woman who will get exactly what she wants, no matter what it takes. I believe that that is a great attribute to somebody's personality - the will to embrace change and not fear it, not looking back of your shoulder, full of regrets. Rita is also now in a position to do whatever she likes. She has achieved her goal and has many options; perhaps to France with her new student friends; she might go to her mother's or she might even start a family. Now that she has "discovered herself," she is free within herself to travel towards any destiny she wishes. I also feel that what Russell is saying to us is exactly what Rita learns: that if you want something enough, and you are ready to do what it takes to achieve it, then anything you want to do is, without a doubt, more than possible. He is also displaying that choices we make should be for what we think is best for us, and that education may give you a better chance in life, but won't necessarily lead to ultimate happiness. Iain McEwen ...read more.