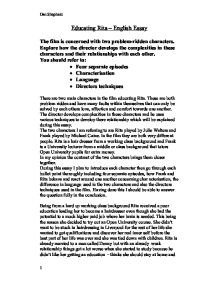 Educating Rita - Explore how the director develops the complexities in these characters and their relationships with each other.

Educating Rita - English Essay The film is concerned with two problem-ridden characters. Explore how the director develops the complexities in these characters and their relationships with each other. You should refer to: * Four separate episodes * Characterisation * Language * Directors techniques There are two main characters in the film educating Rita. These are both problem ridden and have many faults within themselves that can only be solved by each others love, affection and comfort towards one another. The director develops complexities in these characters and he uses various techniques to develop there relationship which will be explained during this essay. The two characters I am referring to are Rita played by Julie Walters and Frank played by Michael Caine. In the film they are both very different people. Rita is a hair dresser from a working class background and Frank is a University lecturer from a middle or class background that tutors Open University pupils for extra money. In my opinion the contrast of the two characters brings them closer together. During this essay I plan to introduce each character then go through each bullet point thoroughly including four separate episodes, how Frank and Rita behave and react around one another concerning characterisation, the difference in language used in the two characters and also the directors techniques used in the film. Having done this I should be able to answer the question fully in the conclusion. Being from a hard up working class background Rita received a poor education leading her to become a hairdresser even though she had the potential to a much higher paid job where her brain is needed. This being the reason she decided to try out an Open University course. She didn't want to be stuck in hairdressing in Liverpool for the rest of her life she wanted to get qualifications and discover her real inner self before the best part of her life was over and she was tied down with children. ...read more.

and chose the pub with her family over Frank's drink party is because she did not want to be the funny girl at the party as she would have been seen slightly different from everybody else. This episode also covers Rita's sisters wedding. At the wedding Rita's father is moaning at her as she is twenty seven and not married or pregnant (as it is fairly normal to be pregnant when married by Rita's age in her lifestyle. This contrasts with Frank's world because middle class women would be expected to be married before having any children). She does not want to marry Denny or get pregnant because she wants to find her true self and her full potential before she wastes the rest of her life. This is quite philosophical and thoughtful for someone with Rita's background and social class. The final episode could also be seen as the most important because it is the time when Frank and Rita finally leave each other. This episode shows that there relationship together has developed to be good but not strong enough because even though Rita is very sad when she leaves Frank she did have the chance to go with him. I think that she decided it would be best to leave Frank rather than stay with him because even though she had come up a lot in the world since they met they were still two very different people. In this episode we know how much Frank and Rita needed and thought about each other because, he looked for her in a club at the start in a drunken state even though she was not there which showed how much he needs her, he looked through the door while she was doing her exams which showed his concern, she thought about him constantly through the test, he gave her a dress and asks her to go away with him and also she cuts his hair and tells what a good teacher he is. ...read more.

world, use of humour - when Rita goes the wrong way after telling Frank he needs a hair cut, idea of tension - when Rita and Denny do not speak while her books are being burnt, opening and closing scenes - the film is opened with music with Rita coming into Frank world and ends with music with Rita leaving Frank and going back to her world and semioligy - the symbol of the statue in the light at night time when Frank is staggering around outside drunk. The final technique used by the director is mis-en-scene which is to put things into the picture. All these media techniques used in the film by the director are to help develop the relationship with Frank and Rita and to develop their complexities. I conclude that in the film Educating Rita the main characters Rita and Frank have many problems. Some of Frank's include; drinking heavily and his girl friend having an affair and some of Rita's include; the brake up of her marriage and not having a good education to back up her University degree. I have explored how the director develops the complexities in Frank and Rita and their relationship together during this essay and found that the director does it by having four separate episodes within the film which most concern each characters problems and their relationship with each other, using characterisation to make Frank and Rita have certain characteristics and to make them react and respond with each other in a way to develop their relationship and react and respond with other people in a way to develop their complexities, using different language for each Frank and Rita so that they have to develop their relationship to be able to communicate well with each other and also use media techniques which helps the development of their relationship and complexities by making the film more appealing and understanding to the audience so that they can relate with the characters better. Dan Shepherd 1 ...read more.