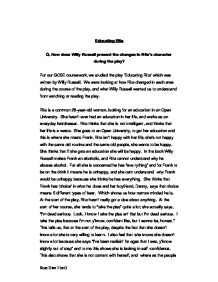 Educating Rita - How does Willy Russell present the changes in Rita's character during the play?

Educating Rita Q. How does Willy Russell present the changes in Rita's character during the play? For our GCSE coursework, we studied the play 'Educating Rita' which was written by Willy Russell. We were looking at how Rita changed in each area during the course of the play, and what Willy Russell wanted us to understand from watching or reading the play. Rita is a common 26-year-old woman, looking for an education in an Open University. She hasn't ever had an education in her life, and works as an everyday hairdresser. Rita thinks that she is not intelligent, and thinks that her life is a waste. She goes to an Open University, to get her education and this is where she meets Frank. Rita isn't happy with her life; she's not happy with the same old routine and the same old people, she wants to be happy. She thinks that if she gets an education she will be happy. In the book Willy Russell makes Frank an alcoholic, and Rita cannot understand why he abuses alcohol. For all she is concerned he has "everything" and for Frank to be on the drink it means he is unhappy, and she cant understand why Frank would be unhappy because she thinks he has everything. ...read more.

She says "One day, y'own up to yourself an' y' say, is this it? Is this the absolute maximum I can expect form this livin' ark". This actually tells us that she feels her life is wasted, and that she wants to do something about it. During the course of the play, Frank sets her essays to do. The first essay she is given to do, is one on Ibsen's Peer Gynt. She writes 1 line. Frank manages to pursuade Rita to go and see Macbeth at the theatre, and she loves it. I think at this point in the play, Rita is just starting understand things a bit more. She says, "Wasn't his wife a cow eh? And that fantastic bit where he meets Macduff an' he thinks he's all invincible". This tells me that she is coming out if herself and maybe even starting to enjoy literature. About half way through the book, Rita starts to feel out of place with everyone. She feels that she is too educated for her family and people around her, but not educated enough to be around Frank. ...read more.

Don't you like it that the little girl has grown up". Willy Russell is trying to show that Rita is becoming more educated and she thinks she has become educated but she is just starting to understand everything that she has been taught, Rita also wants to be more like Frank and she thinks her new friend is the female version of Frank, Rita also thinks that she is educated because she is just like Trish (the female version of Frank), she even starts to talk and act like Trish "What's wrong with your voice? Nothing I'm just talking properly... Trish says that no matter how difficult I may find it I must preserve" Because of this Rita thinks that she is singing a new song. When Trish tries to commit suicide Rita realises that she is not educated, this is because Rita thought that Trish had everything but Trish knew she didn't, Rita also realises this now. At the end of the play, Rita takes her exam and she passes it with flying colours. Rita and Frank sort out their dispute and the play ends with Rita giving Frank a hair-cut. Ross Diaz 11wG ...read more.