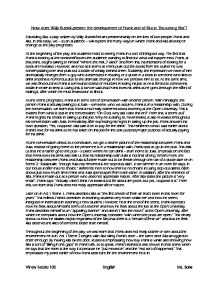 How does Willy Russell present the development of Frank and of Rita in 'Educating Rita'? Educating Rita, a play written by Willy Russell focuses predominantly on the lives of two people: Frank and Rita. In this essay, we - as an audience - will explore the many ways in which Frank and Rita develop or change as the play progresses. At the beginning of the play, the audience react to seeing Frank in a sort of intrigued way. The fact that Frank is looking at the bookshelf leaves the audience wanting to find out what will happen next. Frank, at this point, begins talking to himself "Where the hell...? Eliot?" and from this, his intentions of looking for a book are revealed. However, all is not as it seems as Frank pulls out the books from the author he was contemplating over and pulls out a bottle of whisky behind them. Suddenly, the impression we have of him dramatically changes from a guy who is interested in reading or a quote in a book to someone who likes to drink and this is humorous due to the dramatic change in how we perceive him to be. At the same time, we also find out that Frank is somewhat scared or reluctant in losing his job as he is forced to conceal his bottle in order to keep it. Using this, it can be said that Frank loves his drink as he goes through the effort of hiding it, after which he must endeavour to find it. As the scene progresses, Frank is in some sort of conversation with another person. With hindsight, the person Frank is actually talking to is Julia - someone, who we assume, Frank is in a relationship with. During the conversation, we learn that Frank is not really bothered about teaching at the Open University. This is evident from what is said in the conversation; "Oh God, why did I take this on?" ...read more.

This enthusiasm is further shown at the beginning of scene 6, when she says: "I had to come an' tell y', Frank, last night, I went to the theatre! A proper one, a professional theatre." Rita then goes on to say that she "had to tell someone who'd understand". This shows that she is forced to tell Frank as opposed to someone else such as a "proper student" because she is still of working class and so her class difference to others such as the students is reflected here. At the end of scene 6, Frank invites Rita to his house but we realise that Rita is confronted with a couple of problems. Firstly, it seems as if Rita is worried about the attendance of Denny and how he would react if he were to come: "Will you bring Denny?"; "(puzzled) All right.", after which Rita says, "What shall I wear?". The fact that Rita is unsure of what to wear shows that she feels she is of some difference - in terms of class - to Frank and his friends. Normally, someone who is of the same class or fits in with the person they are being invited by does not ask what kind of clothes they would be required to wear and so this supports my point of Rita's class difference. Throughout the middle of the play, though, it becomes clear why Rita has been confronted with such problems. Upon just asking Denny if he wanted to visit Frank's, Denny "went mad" and they "had a big fight about it". In actual fact, it becomes apparent that even the least important of details matter a lot to Rita. In response to why Rita didn't come, Rita also says that the wine was a factor in her attendance. When Frank says that he wouldn't mind if she'd "walked in with a bottle of Spanish plonk", Rita then says that "It was Spanish" and this is funny to some extent as what Frank deems to be rubbish wine is precisely what Rita had brought along. ...read more.

Before letting Frank finish his sentence, Rita intervenes and says, "...But there is. Come here, Frank..." From this, what immediately comes to mind is something of sexual nature. However, instead, we discover that Rita is giving him a haircut and so this is comical as Willy Russell changes our expectations of what is going to happen so dramatically. In conclusion, I feel that Rita has certainly changed for the better due to a number of reasons. The fact that Rita has become more educated while also changing her class is, without a doubt, development. In addition, it has also become apparent now that Rita has more choice in comparison with before. What's more, Rita also has better choice which is vital as that is what Rita aimed for, to some extent. Despite the fact that she has become less open and more serious over time at the Open University, Rita's objective of bettering herself has truly been accomplished. While Rita's development throughout the play is evident, Frank's seems to be somewhat "half-way there", so to speak. At the beginning of the play, we saw how Frank was rather motivated to come to work as a result of Rita as he regarded her as "a breath of fresh air". However, during the middle/and of the play, we also saw how Frank began drinking more as a result of how insecure he felt. To counter-argue this point though, it can also be said that Frank is portrayed as being less secure right at the end and that Frank now has a better choice in what he can do. Before, we saw how Frank needed to go to work in order to pay for his drink. Now however, he has the choice in whether he wishes to go to Australia or even commit suicide. The fact that he seems happy about going to Australia may also result in a further change in him such as an end to all his drinking. Although it seems unlikely, Frank now has a better reason to enjoy life. ?? ?? ?? ?? Vinay Babla 10S English Ms. Sale ...read more.