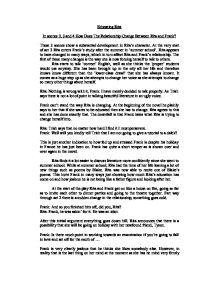 Educating Rita - In scenes 2, 3 and 4 How Does The Relationship Change Between Rita and Frank?

Educating Rita In scenes 2, 3 and 4 How Does The Relationship Change Between Rita and Frank? These 3 scenes show a substantial development in Rita's character. At the very start of act 2 Rita enters Frank's study after the summer in 'summer school'. Rita appears to have changed in many ways, which in turn affect Rita and Frank's relationship. The first of these many changes is the way she is now forcing herself to talk to others. Rita starts to talk 'correct' English, well as she thinks the 'proper' students would use anyway. She has been brought up in the city all her life and therefore knows know different than the 'lower-class drawl' that she has always known. It comes as a huge step up as she attempts to change her voice as she attempts to change so many other things about herself. Rita: Nothing is wrong with it, Frank. ...read more.

Part way through act 2 there is a sudden change in the relationship, something goes cold. Frank: And so you finished him off, did you, Rita? Rita: Frank, he was askin' for it. He was an idiot. After this initial argument everything goes down hill. Rita announces that there is a possibility that she will be going on holiday with her newfound friend, Tyson. Frank: Is there much point in working towards an examination if you're going to fall in love and set off for the south of ... Frank is very clearly jealous that he thinks she likes somebody else. However, in reality that is the last thing on her mind at the moment as she has he mind very firmly fixed on her target of passing her exams. Later on in the passage Frank hands Rita back an essay that she completed. Rita: What's it like? Frank: Oh - it - erm - wouldn't look out of place with these. ...read more.

This is completely the opposite to what she was like at the start of the play when she would do anything for Frank to spend time with her. Once again Rita shows herself to be an exceptional student as she talks about 'The Blossom'. Frank believes that Rita was an A* grade student. Rita: It becomes a more rewarding poem when you see that it works on different levels. Rita: Yeh, that's what you say, Frank; but Trish and me and some others were talkin' the other night, about Blake, an' what came out of our discussion was that apart from the simple surface value of blake's poetry there's always like erm - erm. Frank critisises Rita's essay because there is nothing of her own work in there. Rita hits strait back at Frank telling him he doesn't like it because there are none of his views in the essay. Rita is very correct as previously frank had critised her for only putting her views in the essay. This is the first of many quarrels that were to follow. ...read more.