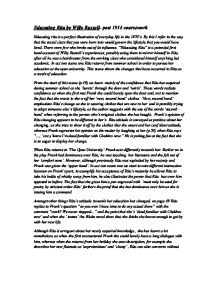 Educating Rita by Willy Russell- post 1914 coursework Educating rita is a perfect illustration of everyday life in the 1970's. By this I refer to the way that the social class that you were born into would govern the lifestyle that you would have lived. There were few who broke out of its influence. "Educating Rita" is a potential first hand account of Willy Russell's experiences, possibly using them to mirror himself in Rita; after all he was a hairdresser from the working class who considered himself anything but academic. In act two scene one Rita returns from summer school in order to pursue her education at the open university. This scene shows the changes that have occurred to Rita as a result of education. ...read more.

when Rita says "...; 'cos y'know I'm dead familiar with Chekhov now." He is poking fun at the fact that she is so eager to display her change. When Rita returns to 'The Open University' Frank acts differently towards her. Earlier on in the play Frank had dominance over Rita; he was teaching her literature and she felt out of her 'comfort zone'. However, although previously Rita was exploited by her naivety and Frank was given the 'upper hand'. In act two scene one we start to note different interaction between on Frank's part; to exemplify his acceptance of Rita's maturity he allows Rita to take his bottle of whisky away from him, he also illustrates the power that Rita has over him opposed to before. ...read more.

and 'classy', Rita can also converse without resorting to using course, vulgar language to compensate for her gaps in knowledge of the English language. Her Education has influenced her to become the way that she is. "Educating Rita" is a very lifelike and realistic play which many of us can relate the issues in our society. One might argue that social classes are still barriers which can lead to misunderstanding, segregation and alienation. It shows what it's like for a person with a working class background to overcome their poverty and become educated. In this play the contrast is set amidst Rita, Frank and their relationship, Frank is preserved, wise and educated whereas Rita is a youthful, na�ve and poorly brought up young woman. It captures Rita's journey for maturity, education at the open university and learning to know herself better. ...read more.