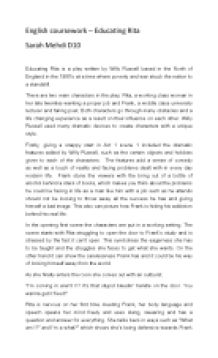 Educating Rita. There are two main characters in the play.

﻿English coursework ? Educating Rita Sarah Mehdi D10 Educating Rita is a play written by Willy Russell based in the North of England in the 1980?s at a time where poverty and war struck the nation to a standstill. There are two main characters in the play; Rita, a working class woman in her late twenties wanting a proper job and Frank, a middle class university lecturer and failing poet. Both characters go through many obstacles and a life changing experience as a result on their influence on each other. Willy Russell used many dramatic devices to create characters with a unique style. Firstly, giving a snappy start in Act 1 scene 1 included the dramatic features added by Willy Russell, such as the certain objects and hobbies given to each of the characters. The features add a sense of comedy as well as a touch of reality and facing problems dealt with in every day modern life. ...read more.

Due to this picture she misunderstands Frank?s choice of art yet doesn?t seem to know that it wasn?t his personal choice. Frank doesn?t even remember the picture being there by saying he hadn?t looked at it for about 10 years, this shows he takes everything for granted and doesn?t appreciate anything. Rita notices the wide viewed window at the back of the room where she suddenly is hooked to which pictures her looking out to freedom. Frank doesn?t even notice that it?s there either, which shows his lack of interest in the outside world. Frank is more of a humble yet secretly sneaky character. He doesn?t seem to show much appreciation for what he has such as having a successful job and a caring girlfriend. During a phone call with his girlfriend, he mentions the word ?lamb?. This could?ve been a technique used where the playwright wanted to show the innocence his girlfriend has compared to Frank. He treats everything with hardly any respect and as soon as Rita enters the scene there was a sudden obvious mood change. ...read more.

It seems as if he wants no fun in life at all and wants to be stuck with the same dull job he has spent doing for over a decade now. He?s a very reluctant person as he refuses for Rita to cut his hair which could mean a big change in the usual ?scruffy? look he has that could make him look like a better person. He admits to being an ?appalling? teacher and refuses to tutor Rita as he feels inadequate for the job and says ?I?m sorry... there are other tutors, I?ll arrange it for you?. In another sense it seems as if Frank is jealous of Rita as she?s trying to make a difference in her life while he doesn?t even bother to do his job properly. Who would expect a university lecturer to be hiding bottles of alcohol around the study and being a raging alcoholic? As the play nears to the end it comes from an awkward ?getting to know each other? feel to not wanting it to end. Both Rita and Frank grow close with each other over time and the viewers grow to love them too. ...read more.