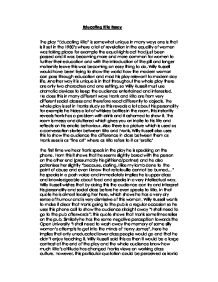 Educating Rita. Willy Russell must use dramatic devices to keep the audience entertained and interested. He does this in many different ways Frank and Rita are from very different social classes and therefore react differently to objects. The whole play

Educating Rita Essay The play "Educating Rita" is somewhat unique in many ways one Is that is it set in the 1980's where a lot of revelation in the equality of women was taking place for example the equal rights act had just been passed and it was becoming more and more common for women to further their education and with the introduction of the pill and longer maternity leave this was becoming an easy thing to do, Willy Russell would have been trying to show the world how the modern woman can pass through education and mad his play relevant to modern day life. Another way it is unique is in that throughout the whole play there are only two characters and one setting, so Willy Russell must use dramatic devices to keep the audience entertained and interested. He does this in many different ways Frank and Rita are from very different social classes and therefore react differently to objects. The whole play is set in Franks study so this reveals a lot about his personality for example he hides a lot of whiskey bottles in the room, this instantly reveals frank has a problem with drink and it ashamed to show it. The room is messy and cluttered which gives you an incite to his life and reflects on his erratic behaviour. ...read more.

would rather endure lower class culture than middle class culture even though he previously expressed negative views on it which could imply that Frank is bored and unhappy with life. Willy Russell first introduces Rita in a very dramatic manner. Rita bursts in very loudly and blames her clumsy entrance on the door handle. This entrance shows how carefree, confident and outgoing she is, she also says "it's that stupid bleeding door handle you wanna get it fixed", She instantly uses 'common' language and seems almost angry the way she reacts to this shows she doesn't handle situations well and also that she doesn't know how to react to teachers or figures of authority and that she is very grounded within herself and doesn't have a clue about the lower class impression she is imprinting on people and obviously isn't generally around people like Frank so she has never been in that kind of social situation to know how to react towards him so she just treats him as she would anyone else which shows the innocence and na�ve characteristics which Frank admired so much in her. However at his point Frank seemed slightly nonplussed about the whole situation and when Rita tells Frank he needs to get it fixed he replies with "erm, yes, I suppose I always mean to", I think he replies with this as ...read more.

I think Rita changed Frank's way of thinking as he thinks Rita's interpretation of assonance is fantastic, in a way Rita introduces Frank to a simple way of thinking and visa versa. The scene also makes the cultural differences between Frank and Rita very clear. Willy Russell shows this by associating Rita with popular culture. To capture the audiences' attention he creates a humorous misunderstanding between Frank and Rita over 'Yates' Rita thinks this is a wine lodge where as Frank is referring to a famous poet "do you know Yates?" "Yates the wine lodge?" This is also funny and effective because Willy Russell aimed this play at both upper and lower class so this is something both classes can relate to and it is again relating to modern situations as apposed to 'old fashioned' situations which helps add to how unique the play is. In conclusion the first scene of the play is very effective and Willy Russell gains the interest of the play in many ways. It shows how education is usually linked to social class; the audience is entertained by humorous misunderstandings for example later in the plat Rita uses the phrase "off your cake," Frank finds this hilarious which shows that Rita is in fact teaching Frank a considerable amount about common culture. As the play progresses the relationship between Frank and Rita strengthens and they become more alike and are both branded as outcasts from their social class. ...read more.