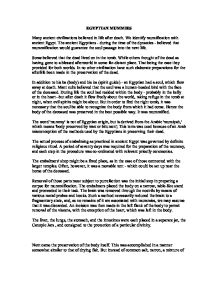 EGYPTIAN MUMMIES Many ancient civilizations believed in life after death. We identify mumification with ancient Egypt. The ancient Egyptians - during the time of the dynasties - believed that mummification would guarantee the soul passage into the next life. Some believed that the dead lived on in the tomb. While others thought of the dead as having gone to a blessed afterworld in some far-distant place. That being the case they provided for both worlds. In no other civilization have such elaborate preparations for the afterlife been made in the preservation of the dead. In addition to his ba (body) and his ka (spirit guide) - an Egyptian had a soul, which flew away at death. Mant cults believed that the soul was a human-headed bird with the face of the deceased. During life the soul had resided within the body - probably in the belly or in the heart--but after death it flew freely about the world, taking refuge in the tomb at night, when evil spirits might be about. But in order to find the right tomb, it was necessary that the soul be able to recognize the body from which it had come. Hence the body of the deceased was preserved in the best possible way. It was mummified. The word 'mummy' is not of Egyptian origin, but is derived from the Arabic 'mumiyah,' which means 'body preserved by wax or bitumen'; This term was used because of an Arab misconception of the methods used by the Egyptians in preserving their dead. The actual process of embalming as practiced in ancient Egypt was governed by definite religious ritual. A period of seventy days was required for the preparation of the mummy, and each step in the procedure was co-ordinated with relevant priestly ceremonies. The embalmers' shop might be a fixed place, as in the case of those connected with the larger temples. ...read more.

The deceased had first to appear before a group of forty-two spiritual assessors and convince them that he had led a righteous life on earth. Then in a final trial before Osiris, king of the nether world, the heart of the deceased was placed on the Great Scales and balanced against a feather, symbol of righteous truth. Anubis, the jackal-headed god who presided over embalming, did the weighing, while Thoth, the ibis-headed scribe of the gods, recorded the result on a tablet. If the heart of the deceased passed this test, he was admitted into heaven. If not, his soul was doomed to roam the earth forever. The Pre-Dynastic Egyptian (before 3000 n.e.) was buried in the sand and was surrounded with pottery jars containing food. He was placed on his side in a contracted position, and was occasionally wrapped in reed matting or animal hide. Later, the dead were placed in crudely made baskets, boxes, or pottery coffins, which were buried in the sand or deposited in small natural caves at the base of the cliffs in the Nile Valley. By 3000 b.c. men of importance had small chambers cut for themselves in the rock, often with a shallow pit or niche to receive the coffin. From these beginnings evolved the typical Egyptian tomb consisting of two essential parts: the burial chamber and a room in which offerings to the dead were placed. Most impressive of all Egyptian tombs are those of the Pyramid Age (2800-2250 B.C.). Those colossal tombs that are as famous as Egypt herself developed from a less elaborate form now called "mastaba" (from the Arabic word mastabah, meaning "bench," which describes the form of the superstructure of the tomb). The mastaba tombs are low, rectangular structures of brick and stone built on bedrock. The building houses an offering chamber, or a series of them, and a secret room containing a statue of the deceased. ...read more.

The animals were mummified, but not always too carefully. Chief stress was laid on the bandaging, the object having been that the package should clearly indicate the kind of animal enclosed. Often these animal mummies were placed in theriomorphic coffins. There are mummies of jackals, cats, ibises, snakes, lizards, gazelles, hawks, bulls, sheep, baboons, crocodiles--in fact, almost every conceivable kind of animal known to Egypt. At some places animal tombs such as those of the Apis bulls at Memphis are found. The tombs of the Apis bulls, which date from the Eighteenth Dynasty and later, consist of subterranean passages and vaults hewn in the rock an aggregate length of some twelve hundred feet. Many of the bulls were placed in huge stone sarcophagi. The ambition of every Egyptian was to have a well mummified body and a perpetually cared-for tomb. The children of the deceased were charged with the maintenance of this home on earth and the observation of all attendant ceremonies. In the case of a favored government official a portion of the state revenue might be assigned as an endowment for the care of the tomb. As the number of deceased ancestors and officials multiplied, however, and the consequent cost of tomb maintenance became excessive, the tendency was to neglect those of the remote past and to concentrate attention on those of the more recently deceased. Thus the living inhabitant of ancient Egypt, with all the faith he placed in the preservation of his own mummy, was constantly faced with the anomaly of neglected and despoiled tombs -for tomb robbers were at work even during the days of mummification. We have Egyptian papyri recording the robbery of royal tombs and the capture and punishment of the despoilers. An archaeologist rarely finds a tomb that has not been plundered. - Anthony's Egyptology Page 'Mummy dust' was sometimes stolen from the Sarcophagi and sold. There are about 500 Egyptian mummies in the US. Most are in museums. Some are privately owned. ...read more.