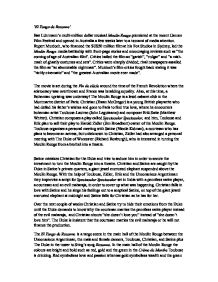 'El Tango de Roxanne' Baz Luhrmann's multi-million dollar musical Moulin Rouge premiered at the recent Cannes Film Festival and opened in Australia a few weeks later to a tsunami of media attention. Rupert Murdoch, who financed the $US50 million film at his Fox Studios in Sydney, led the Moulin Rouge media battleship with front-page stories and encouraging reviews such as "the coming of age of Australian film". Critics hailed the film as "garish", "vulgar" and "a mish-mash of ghastly costumes and sets". Critics were sharply divided; rival newspapers assailed the film as "an abominable nightmare". Murdoch's film critics fought back stating it was "richly cinematic" and "the greatest Australian movie ever made". The movie is set during the Fin de si�cle around the time of the French Revolution where the aristocracy was overthrown and France was heralding equality. Also, at this time, a Bohemian uprising was underway! The Moulin Rouge is a lewd cabaret club in the Montmartre district of Paris. ...read more.

The Duke is insistent that the courtesan marries the evil maharaja or he will not finance the production. The El Tango de Roxanne is a tango scene in the main hall of the Moulin Rouge between the Unconscious Argentinean, the male and female dancers, Toulouse, Christian, and Satine plus The Duke in the tower to Sting's song Roxanne. In the main hall of the Moulin Rouge the colours are bright and bold such as red, gold and the green in the Cr�me de Menthe Toulouse is drinking. Red symbolises love and passion whereas gold symbolises wealth and the green in the Cr�me de Menthe also represents the envy between Christian and The Duke. The tables in the Moulin Rouge are circular, symbolising equality which is one of the main beliefs of the bohemian lifestyle, whereas the table in the tower is long and rectangular showing power, male dominance and fear. The colours in the tower is a mix of blacks, dark blues and greys which symbolise the mystery around the Duke and Satine. ...read more.

Satine begins to sing, her and Christian's secret song that they created to show their love and passion will never end but Satine forgets the Duke is behind her and sees her singing to Christian. The Duke is raging with anger and rips off a diamond necklace he has presented to Satine as a gift but also has the representation of a lead connecting her to him like an animal. In the main hall the dancers a flung and dragged across the hall as if they were toys for well-off men to have their way with and abandon in the gutters like cretins. The scene ends with Nini Legs-In-The-Air being thrown from man to man. When she is thrown back to the Unconscious Argentinean he throws her to the floor like a piece of garbage. My outlook of this extravagant scene is utter delight. This scene really captures the passion, envy and hatred between Satine, Christian, and the Duke. It encapsulates Baz Luhrmann's artistic mastermind and allows the general audience to position themselves within the scene and join in with the whirlwind of emotion as it drives the characters apart. ...read more.