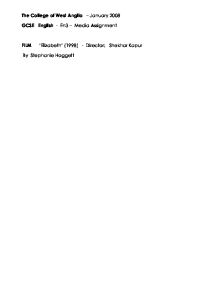 The College of West Anglia - January 2008 GCSE English - En3 - Media Assignment FILM 'Elizabeth' (1998) - Director: Shekhar Kapur By Stephanie Hoggett At first glance the film 'Elizabeth' (1998) directed by the Indian Shekhar Kapur and staring Cate Blanchett in the title role, promises to be a spectacular 'blockbuster' movie for it stars a host of famous accomplished actors including: Geoffrey Rush as Sir Francis Walsingham, Sir Richard Attenborough as Sir William Cecil, Joseph Fiennes as Robert Dudley, Christpher Eccleston as the Duke of Norfolk and even a brief performance by Sir John Gielgud as the Pope. Indeed the video sleeve boasts the films achievement of five 'Bafta' awards. However, in this review I shall argue that despite some redeeming features the film fails to achieve its prime objective to capture the full flavour of English politics during the formative years of reign of Elizabeth I of England as it is riddled with unnecessary historical inaccuracies. The film attempts to deal with a number of political issues facing sixteenth century England, and begins in 1554 during the reign of Elizabeth's catholic step sister Mary. Immediately the audience is in no doubt that this is an age of great cruelty and religious strife as Protestant martyrs Latimer ...read more.

However in reality Leicester did not betray Elizabeth and remained loyal until his death. Fiennes never really plays the role with enough passion to be taken seriously as a suitor. It is the visit of the Frenchman Henri Duke of Anjou that is particularly annoying. At first it looks as though Elizabeth is smitten; she considers matrimony, marches with vigour towards his quarters and witnesses Anjou hosting an orgy dressed as a woman, is such an inaccurate scene really necessary?, or is its inclusion merely to boost ratings and sell more tickets?, needless to say Elizabeth firmly rejects his proposition. According to Kapur this story takes place during the 1560's when Elizabeth was a very young woman, wrong! , in reality the two never met and the proposal was for marriage to Francois, Henri's younger brother in 1579 when Elizabeth was forty five. However this interlude does include a splendid water pageant with an assassination attempt on Elizabeth, justly illustrating her vulnerability as the virgin queen. Throughout the film Elizabeth dodges the question of marriage, in one conversation with Cecil she announces ''I will have one mistress here, and no master'', later on she asserts herself as a ruler and a 'Prince' by announcing '' I may be a woman, ...read more.

The study of 'interpretations' is also a key ingredient in modern History teaching. The numerous factual inaccuracies provide a challenging exercise for pupils to distinguish between fact and fiction in addition to comprehending the directors' motivation. So should you contribute to the $82.1 million dollars that the film has already made worldwide or give this one a miss? Well as with all things its horses for courses; an accurate piece of History it is not, an entertaining evening with a spot of sex, violence and intrigue it maybe. The film does not even begin to compete with the accomplished performance of Glenda Jackson as 'Elizabeth' in the 1972 classic 'Elizabeth R' or the more recent film 'The Virgin Queen' starring Helen Mirren. If you want a more polished and accurate portrayal I suggest you try one of these. BIBILOGRAPHY 1. Film - 'Elizabeth' Universal (1998) 2. Wikipedia - free internet encyclopaedia 3. Film reviews - Internet - accessed on 28/12/07 (1) Rogerebert.com (2) CNN - Blanchett a queenly knockout as 'Elizabeth' by Paul Tatara (3) Time Out London - Elizabeth movie review (4) Imdm.com / reviews - by Steve Rhodes (5) About Film.com- By Carlo Cavagna (6) Los Angeles Times - by Jack Matthews (7) Nitrate Online - by Elias Savada (8) The Austin Chronicle - by Russell Smith (9) BBC Films by Matt Ford ...read more.