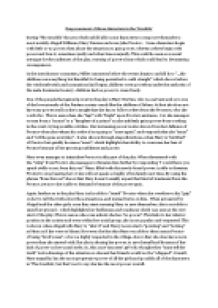 Empowerment of three main characters in The Crucible

﻿Empowerment of three characters in the ?Crucible? During ?The Crucible? the acts which unfold able some characters to empower themselves: most notably Abigail Williams, Mary Warren and even John Proctor. Some characters begin with little or no power, then abuse the situations to gain power, whereas others begin with power and lose it, sometimes justly and other times unjustly. This could be seen as a moral message for the audiences of the play, warning of power abuse which could lead to devastating consequences. In the introductory comments, Miller comments before the events begin to unfold how ??the children were anything but thankful for being permitted to walk straight? which shows before the witchcraft trials and accusations had begun, children were powerless under the authority of the male dominated society -children had no power to roam freely. One of the people that gained power in the play is Mary Warren, who is a servant and so is one of the lowest ranks of the Puritan society- much like the children of Salem. At first she does not have any power at all as she is taught that she has to follow orders from the Proctors, who she works for. ...read more.

However, the fact that Mary was able to then accuse Proctor of being ?devil?s man?, who is a highly respected in the village, shows that she does have more power than she started with. But she is abusing her power, to save herself and because of her lack of power on her social circle. So, this once ?innocent? girl who thought they ?must tell the truth? took advantage of the situation so she and her friends would not be ?whipped?. Overall, Mary arguably, has the most progressive power of all the girls and possibly all of the characters in ?The Crucible?, but that?s not to say she has the most power overall. Another character like Mary Warren who gains power throughout the play is Abigail Williams. Once shunned and scorned by the inhabitants of the village because of her ?blackened name?, Abigail becomes a domineering power, and is treated like a ?saint?. A mere accusation from Abigail or one of her girls is enough to convict even a well-respected inhabitant of Salem like Rebecca Nurse who does ?great charities?. Even though in present day we would associate ?saint? with good Samaritans, which would seem absurd to see Abigail called this in present day, she was seen in this way because in puritan society if you went against god, you went against the law. ...read more.

The third character who is subtly empowered is John Proctor. Despite his prideful ways, John Proctor describes himself as a "sinner." His conversation with Elizabeth in act two where he exclaims for Elizabeth to ?judge him not? demonstrated his internal conflict and his own unwillingness to forgive himself for his act of lechery. There are moments when his anger and disgust towards himself burst forth, such as when he exclaims to Judge Danforth: ?I hear the boot of Lucifer, I see his filthy face! And it is my face, and yours.? So, although it is not clear from the outset that John Proctor has been empowered, he has. He is able for the first time to ?see some shred of goodness? in himself- his relief from his constant guilt- when he decides to deny his confession. In conclusion, all three characters were empowered through the play, which led to the unjust killing of numerous inhabitants of Salem through the false allegations of witchcraft. So, Miller uses this to show the audience the consequence of abuse of power. Abigail is the best example because she falls from her position of high power, and resorts to boarding a ?ship?, in order to escape. ...read more.