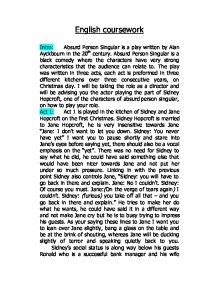 English coursework Intro: Absurd Person Singular is a play written by Alan Ayckbourn in the 20th century. Absurd Person Singular is a black comedy where the characters have very strong characteristics that the audience can relate to. The play was written in three acts, each act is preformed in three different kitchens over three consecutive years, on Christmas day. I will be taking the role as a director and will be advising you the actor playing the part of Sidney Hopcroft, one of the characters of absurd person singular, on how to play your role. Act 1: Act 1 is played in the kitchen of Sidney and Jane Hopcroft on the first Christmas. Sidney Hopcroft is married to Jane Hopcroft, he is very insensitive towards Jane "Jane: I don't want to let you down. Sidney: You never have yet" I want you to pause shortly and stare into Jane's eyes before saying yet, there should also be a vocal emphasis on the "yet". There was no need for Sidney to say what he did, he could have said something else that would have been nicer towards Jane and not put her under so much pressure. Linking in with the previous point Sidney also controls Jane, "Sidney: you will have to go back in there and explain. Jane: No I couldn't. Sidney: Of course you must. Jane:(On the verge of tears again) I couldn't. Sidney: (furious) you take off all that - and you go back in there and explain." ...read more.

what he is good at "Jane: You want to know anything, you just ask Sidney" and she is starting to copy his words "Sidney: Each to his own. Jane: Each to his own." This might be because of Sidney's rise in his social status or it might be because she is frighten that he will react in a bad way and she doesn't want him to shout at her. In act 1 Sidney was making Jane feel bad by putting her under pressure but in act 2 he shouts at her for making a mistake that she didn't want to happen. "Sidney: Look at what you've done! You silly woman! (Beating her away) Don't do that! Don't do that! It's too late for that." Even thought Sidney told her not to pour anything down the drain because he was fixing it she did it by accident. He should not have reacted the way that he did because he just snapped at her in front of the other people which would be really embarrassing for Jane and make her look like she's just with Sidney and obeys his rules. Alan Ayckbourns stage directions "beating her away" make Sidney look cold and sinister almost like a dictator trying to be in control. After Jane pours the dirty water over Sidney you should just shout really loud until your face goes red and putting your hands on Jane's shoulders to push her down, she will be blubbering beneath Sidney. The other characters should be gasping in astonishment, the light should be dimmed to make the scene look more sinister. ...read more.

Walked straight into that. Well, happy Christmas, all." I want you to act surprised when they tell Sidney that it was a game and whilst saying the lines give them a quiet applause to congratulate them all. The control has completely shifted to Sidney's side, as all Jane can do is copy the things he says "Sidney: you should know those. Jane: you should know those, shouldn't you?" and "Sidney: what a house. Beautiful. Jane: Lovely." Jane either doesn't know what to say or she doesn't want to get Sidney in a mood. At the end of act 3 Sidney gets every one to play a game where they have to dance to music and when Sidney stops the music they have to freeze and if someone moves they get a forfeit. "Sidney: And off we go...!" Sidney has them doing what he wants, like a ringmaster cracking his whip to keep everyone in line. Right at the end Sidney get obsessed and keeps telling them to "Sidney: Dance. Come on. Dance. Dance. Come on. Dance. Dance. Dance. Keep dancing. Dance..." Sidney gets carried away, he doesn't know when to stop now that he has got them doing what he wants. To conclude Sidney has developed in a great way over the three acts. He's gained a lot of control; from only controlling Jane in act 1 to controlling everyone by making them dance to his tunes his upgrade in social class will have helped him with this because if he was still poor like in act 1 no one would have even taken notice of the things he says. ...read more.