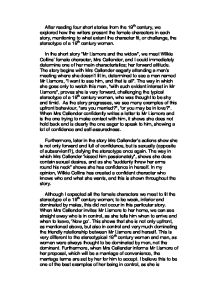 After reading four short stories from the 19th century, we explored how the writers present the female characters in each story, mentioning to what extent the character fit, or challenge, the stereotype of a 19th century woman. In the short story "Mr Lismore and the widow", we meet Wilkie Collins' female character, Mrs Callender, and I could immediately determine one of her main characteristics; her forward attitude. The story begins with Mrs Callender eagerly attending a men's meeting where she doesn't fit in, determined to see a man named Mr Lismore, "I want to see him, and that is all". The way in which she goes only to watch this man, "with such evident interest in Mr Lismore", proves she is very forward, challenging the typical stereotype of a 19th century woman, who was thought to be shy and timid. As the story progresses, we see many examples of this upfront behaviour, "are you married?", "or you may be in love?". When Mrs Callender confidently writes a letter to Mr Lismore and is the one trying to make contact with him, it shows she does not hold back and is clearly the one eager to speak to him, showing a lot of confidence and self-assuredness. Furthermore, later in the story Mrs Callender's actions show she is not only forward and full of confidence, but is sexually (opposite of subservient?), defying the stereotype once again. The way in which Mrs Callender 'kissed him passionately", shows she does contain sexual desires, and as she "suddenly threw her arms round his neck" shows she has confidence in herself. ...read more.

This opinion is proved to be correct when we are told "she could storm a town, single-handed", which suggests a strong and dominant woman. It is clear that Mr Meek despises Mrs Prodgit and Mrs Bigby, and he makes them sound like nasty, controlling monsters, "brought desolation and devastation into my lowly dwelling". I think that Dickens used alliteration to emphasise the words "desolation" and "devastation", making it a more powerful and effective phrase. I believe Dickens done this purposely to make the reader form a stronger hatred towards these female characters. Also, although this is not a serious story and has a light-hearted feel, as does "Tony Kytes, the Arch Deceiver", this phrase does make us sympathise with Mr Meek, but in a comical way because he is a weak man scared of two women, which makes the reader laugh at Mr Meek. Furthermore, Mr Meek tells us "that female was Mrs Prodgit" I think that by using the words "that female" instead of 'she' is very significant, and is an effective way of telling us Mr Meek does not think kindly of Mrs Prodgit. This opinion is shown to apply for Mrs Bigby also, for example when Mr Meek speaks very coldly about her living with them, "who resides with us" it suggests she is an unwanted interference. The short story, 'Tony Kytes, the arch deceiver', introduced us to 3 main female characters - Hannah Joliver, Unity Sallet and Milly Richards, all of whom share some small similarities and major differences with Mrs Callender, Mrs Bigby and Mrs Prodgit. The start of 'Tony Kytes, the Arch Deceiver' starts in an unusual way compared to the other two stories mentioned, "Twas a little, round, firm, tight face". ...read more.

As fate eventually brings Sophy and Sam to meet again, it seems she is a much happier woman, "Sam's presence had revived her". As the reader, this brings me joy for Sophy as she seems to deserve a bit of happiness. However, when Sam asks Sophy to move away with him, Randolph erupts at the thought of it, "I'm ashamed of you! It will ruin me!", simply because Sam is not "a gentleman". Sophy immediately says she will "struggle against it", which shows not only Randolph's selfish and cruel personality, but also his dominance over his mother. With 5 years and many reproaches to the question in hand, Randolph "maintained his ascendancy" and made Sophy swear not to marry Sam Hobson, to which she obeyed, and then died an unhappy woman. This cruel ending shows Sophy being dominated by men throughout her lifetime, eventually ending in an unhappy death because others controlled every aspect of her life. This great dominance is alike Tony Kytes' power over the woman, although "The Son's Veto" portrays it in a more serious but also effective way that, in my opinion, creates a more powerful short story that that of "Tony Kytes, the Arch Deceiver". Although the female characters in "Mr Lismore and the Widow", "Births. Mrs Meek, of a Son", "Tony Kytes, the Arch Deceiver" and "The Son's Veto" had some similar characteristics, each of the four short stories mentioned portray their female characters in a different way from the others, making it interesting to write about their similarities and differences. The different styles and genres in which the authors wrote made each of the four stories very different to the next, with each female character fitting, or challenging, the typical stereotype of a 19th century woman to a different extent. Toni Wood ...read more.