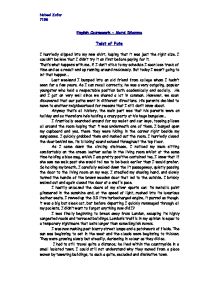 English Coursework - Moral Dilemma Twist of Fate I hurriedly slipped into my new shirt, hoping that it was just the right size. I couldn't believe that I didn't try it on first before paying for it. That's what happens with me, if I don't stick to my schedule I soon lose track of time and as a result end up running around recklessly. But today I wasn't going to let that happen... Last weekend I bumped into an old friend from college whom I hadn't seen for a few years. As I can recall correctly, he was a very outgoing, popular youngster who held a respectable position both academically and socially. He and I got on very well since we shared a lot in common. However, we soon discovered that our paths went in different directions. His parents decided to move to another neighbourhood for reasons that I still don't know about. Anyway that's all history, the main part was that his parents were on holiday and so therefore he's holding a crazy party at his huge bungalow... I frantically searched around for my wallet and car keys, tossing pillows all around the room hoping that it was underneath one of them. I banged open my cupboard and yes, there they were hiding in the corner right beside my sunglasses. I quickly grabbed them and rushed out the room. I hurriedly closed the door behind me, its 'clicking' sound echoed throughout the top floor. As I came down the circling staircase, I noticed my mum sitting comfortably on the cream leather sofas in the living room whilst at the same time holding a blue mug, which I am pretty positive contained tea. I knew that if she saw me walk past she would tell me to be back earlier than I would prefer. So holding my breath, I carefully walked down the lit passageway, quietly passing the door to the living room on my way. ...read more.

maybe I've known her in the past? Questions began to explode in my head faster than I could answer them. "I'm Sarah his girlfriend. He told me that his old friend from college is coming, he's told me a lot about you... I've been longing to meet you." She continued, with a very exquisite tone in her soft voice. Imran's girlfriend? That lucky idiot, how did he pull it off? I just couldn't believe it. His girlfriend was charming and sensational. I guess now I knew why Imran was very happy to live in this secluded but peaceful town. Its inhabitants were both charming and friendly, and if you had friends has nice Sarah, than why would you want to move to a crowded place like London? "Well... thanks Sarah, nice to meet you too. I guess Imran is a very lucky guy to have a girlfriend as stunning as you." I replied. I deliberately made sure that I complimented her in a friendly, casual way, whilst making sure that I gave a good first impression of myself to both her and her friends nearby. She laughed and gave one of her dazzling smiles. "Thanks Omar!" She remarked back. "Shall I call Imran for you? I'm sure he's probably going crazy inside!" "Yeah Please do." Even though it was getting dark and the clouds were beginning to fade away, her eyes continued to shimmer in the flashlight, just like the brightest stars in the night sky. From just talking with her for a minute, it felt as though I knew her for a long time. She seemed like a very cool, open-minded girl who was very confident and lively. I followed her through the crowded passageway, past numerous girls who gave me welcoming smiles. Thank god! She led me through a large room filled with laughter and music. It was crowded; I couldn't believe how many people there were. ...read more.

I found it difficult to open my eyes; they felt as though someone had taped them down. Abruptly, I began to hear my name. Omar...Omar...Omar, someone was repeating it. I could tell it was a woman but who could it really be. I couldn't make sense of anything. I tried vigorously to open my eyes. Bit-by-bit they began to open. Everything around me was blurry, as though I was covered by a thick dense fog. I felt someone's soft warm hand touch my icy arm; it had to be my mum. Her vibrant and warm body heat raced across my body. My vision slowly became sharper and crystal-clear...I was in hospital. I had an oxygen mask over my mouth and was connected to several machines. Each of them monitored me for signs of improvement. A continuous 'beeping' noise was coming from my left side. It was a machine monitoring my fast, racy pulse. I felt pain all over; it felt as though I had been clamped throughout my body. My mum and dad were both next to me, on either side. My mum was holding a tissue; I could see that she had been crying. There was a doctor in front of the bed, he was speaking to my parents, but I couldn't understand his fuzzy unclear words. Smiles began to sweep across the room, everyone's face lit up in a warm, radiant glow. "How you feeling son?" my dad asked, I could see the how relieved he was to see me awake. The hours I had been unconscious must have been a nightmare for them. I had emotionally tortured them. Simply because I had drunk alcohol before driving; I knew the risks, but still I allowed myself to be pressurised into making a decision; and it was thanks to this decision that I agonized the feelings of people that truly loved me. I felt ashamed, but there was nothing I could do... I could only try my best to fully recover and bring back the beaming and ecstatic smiles of my family and close friends. Nabeel Zafar 7158 ...read more.