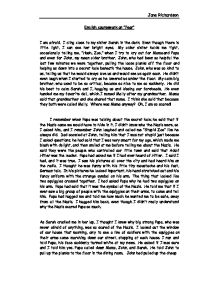 English coursework on "Fear" I am afraid. I cling close to my sister Sarah in the dark. Even though there is little light, I can see her bright eyes. My older sister holds me tight, occasionally telling me, "Hush, Zoe," when I try to cry out for Mama and Papa and even for John, my mean older brother. John, who had been so helpful the last few minutes we were together, pulling the loose planks off the floor and helping us down into a secret hole beneath the house. John, who was so kind to us, telling us that he would always love us and would see us again soon. He didn't even laugh when I started to cry as he lowered us under the floor. My calm big brother, who used to be so critical, became so nice to me so suddenly. He did his best to calm Sarah and I, hugging us and kissing our foreheads. He even handed me my favorite doll, which I named Molly after my grandmother. Mama said that grandmother and she shared that name. I think she said that because they both were called Molly. ...read more.

Papa called from the kitchen for John, who rushed into the dining room. A few seconds later, Mama came into view. She handed Sarah a bag full of food, Sarah's books, and some letters. She said they were from my aunt in England, who would take care of us if anything happened. I looked at Mama, who smiled at us, although she looked very sad and scared. She said that we would see each other again and told us that she loved us both. That's when John brought me my doll and Papa handed Sarah a single candle a packet of matchsticks. Suddenly, I heard noises outside our house, and John began to close the hole. Papa had told John to get in the hole, but he refused, saying there was not enough food for the three of them. He said he would rather stand up to the Nazis than hide anyway. I admired my brother then, for the first time in my life. He looked so brave and strong, like Papa. The noises grew louder, and I finally understood that they were voices loud male voices. Mama and Papa and John had said goodbye as they covered the hole. ...read more.

I want to call out to my family, but Sarah is hushing me. She doesn't think it is our family. Part of me doubts it too. The voice is calling. It is a female voice! Calling for someone named David and Molly. I immediately think of my Papa and Mama; that was their names. The voice calls for John, then Sarah, then Zoe. Someone is calling for us! Sarah looks up and pounds on the floorboards above us. "Auntie! Auntie!" she calls. I join in, realizing who the voice belongs to. We pound on the floorboards, calling for her. We hear her footsteps running into the dining room, calling for us, asking where we are. I tell her we are under the floor and ask her to pull up the loose boards on the left side of the table. I hear scraping and see the boards lifting away. The bright light nearly blinds us, but we shade our eyes. We see Auntie standing over us. She is crying hard, but she lifts Sarah out of the floor, then me. We hold each other tight, sobbing. I see Auntie's face through my tears, smiling down at me. I know that I don't have to be afraid anymore. My fear leaves me as we exit the house, shutting the door behind us. Jane Richardson ...read more.