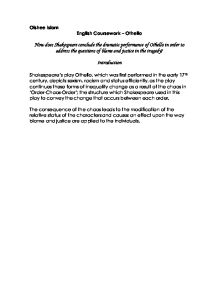 Oishee Islam English Coursework - Othello How does Shakespeare conclude the dramatic performance of Othello in order to address the questions of blame and justice in the tragedy? Introduction Shakespeare's play Othello, which was first performed in the early 17th century, depicts sexism, racism and status efficiently, as the play continues these forms of inequality change as a result of the chaos in 'Order-Chaos-Order'; the structure which Shakespeare used in this play to convey the change that occurs between each order. The consequence of the chaos leads to the modification of the relative status of the characters and causes an effect upon the way blame and justice are applied to the individuals. One of the main characters of the play is Othello; his importance in the play is that he is a general of the powerful city Venice "The Duke does greet you, General..." I.2 page 59. The introduction of him puts an impact on his reputation because it begins with racist comments, told by three characters: Iago "his Moorship's Ancient." I.1 page 53, Brabantio "It is too true and evil...with the Moor" I.1 page 57 and Roderigo "...full fortune does the thick-lips owe" I.1 page 53. ...read more.

Iago was always against women, known to be a misogynist "It is a creature..." IV.1 page 135. While altering Othello's thoughts he had made him think almost in the same way is well, this brings sexism in the play "She says enough; yet she's a simple bawd..." IV.2 page 144 (all of Othello's speech). The same as racism, sexism was not considered as a problem during the 17th century. Sexism is mentioned towards the end of Act IV, because it is the last step to begin the tragedy. Act V starts off with a small battle between Cassio, who was the lieutenant of Venice and Roderigo, who was not accepted as a lover by Desdemona. Roderigo had died after being betrayed by Iago 'he stabs Roderigo' V.1 page 160 and mentioned his true character in front of everyone else who was present "O damned Iago! O inhuman dog!" V.1 page 160, as Iago cunningly speeded up the scene the last words of Roderigo was left unnoticed "How silent is this town! Ho, murder..." V.1 page 160, the tragedy has just begun, if Iago was to be unmasked at this stage the play would end sooner than it should. ...read more.

Othello had lost his body because of Iago controlling it, his title which he just lost and his perfect soul because he just killed an innocent person whom he loved, making Othello into nothing therefore he deserved to die. Conclusion Three main characters were shown and how they were different compared to each other in the play. How the chaos can change their status was also mentioned. Racism, Sexism and Status have been mentioned to show how the story gradually leads to the tragedy. During the chaos the features of each character is affected, causing both Othello and Desdemona to lose their existence and Iago to lose his power of speech, leading him towards justice. Towards the end of the play Othello did not have the same high status as he had when he was at the beginning because he had lost everything he had; this means that he is the one who is to blame for the tragedy. "My parts, my title, and my perfect soul shall manifest me rightly" I.2 page 59. Lodovico is known to be the most important because he is the last character to speak towards the end of the play; he was the only character who was not affected by Iago at all. ...read more.