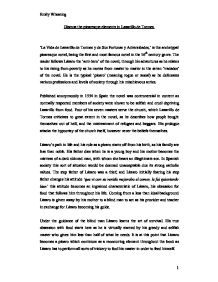 Discuss the picaresque elements in Lazarillo de Tormes. 'La Vida de Lazarillo de Tormes y de Sus Fortunas y Adversidades,' is the archetypal picaresque novel, being the first and most famous novel in the 16th century genre. The reader follows L�zaro the 'anti-hero' of the novel, through his adventures as he relates to his rising from poverty as he moves from master to master in the seven 'tradados' of the novel. He is the typical 'p�caro' (meaning rogue or rascal) as he delineates various professions and levels of society through his mischievous antics. Published anonymously in 1554 in Spain the novel was controversial in content as normally respected members of society were shown to be selfish and cruel depriving Lazarillo from food. Four of his seven masters serve the church, which Lazarillo de Tormes criticizes to great extent in the novel, as he describes how people bought themselves out of h**l, and the mistreatment of refugees and beggars. His prologue attacks the hypocrisy of the church itself, however never the beliefs themselves. L�zaro's path in life and his role as a p�caro starts off from his birth, as his family are less than noble. His father dies when he is a young boy and his mother becomes the mistress of a dark skinned man, with whom she bears an illegitimate son. In Spanish society this sort of situation would be deemed unacceptable due its strong catholic values. The step father of L�zaro was a thief, and L�zaro initially fearing his step father changes his attitude 'que vi con su venida mejoraba el comer, le fui quieriendo bien' this attitude becomes an ingrained characteristic of L�zaro, his obsession for food that follows him throughout his life. ...read more.

'El Escudero' brings hope to L�zaro as he adopts him to be his servant. Although the squire appears to be well dressed and confident when L�zaro is brought into his house which is 'oscura y l�brega' he realises that he is as poor as L�zaro himself despite appearances, and that his master will not be able to provide him anything, and he turns to despair. 'Finalemente all� llor� mi trabajosa vida pasa y mi cercana vida muriente.' The disappointment that L�zaro feels with the squire foreshadows his conscious abandonment of L�zaro at the end of the tratado. His relationship with this master is different as they act as allies rather than enemies in order to beat their hunger. L�zaro pities his master despite the squires* pride and stress on honour 'la negra que llaman honra' and begs for him, acting as the provider for the first time rather that the provided for. There is a mutual respect as neither the master nor the servant speaks of the reality of their situation as they live on the brink of starvation as they face constant hunger, symbols of death lie all about them as they live in 'the house without food or drink.' The roguishness of L�zaro is put to one side in this partnership as L�zaro does not have to cheat his master, and his master is not cruel. L�zaro begging for food cannot be seen as a dishonest act as he shares all that he finds. The intimacy in this tratado shows how L�zaro is becomes more humanised, only making his final betrayal more deep when his master ...read more.

The novel and its picaresque elements are not solely confined to the character of Lazarillo de Tormes. His masters in someway or another were all p�caro's themselves. The blind man sold prayers to women charging them and giving them false hope in exchange for food. The priest act extremely uncharitably and starves L�zaro whilst he is a glutton himself. The squire is a p�caro in the sense that he deceives people into thinking that he is a man of honour from the way he dresses, whereas in reality he is penniless and starving, finally performing the ultimate act of betrayal and abandoning L�zaro leaving him to face people he owes money to. The Pardoner who sells remissions of sins is probably the worst p�caro of them all as he deceives larges groups of people into thinking that they have a definite place in heaven. Finally the Archpriest is a rogue for convincing L�zaro to marry his mistress, whilst keeping his good name unblemished. The element of the picaresque is ongoing throughout the book. Despite L�zaro being the main p�caro of the book initially is it not from his choosing. He is pushed into becoming a rogue from the cruelty of his masters, which then in later life lowers his morals as he become similar to his masters himself, greedy and selfish. L�zaro's life turns a circle as he becomes like his mother marring himself to the hand that feeds him. By the end of the book L�zaro is a rogue by choice and admission, unlike during his childhood where becoming a rogue was a matter of survival. ...read more.