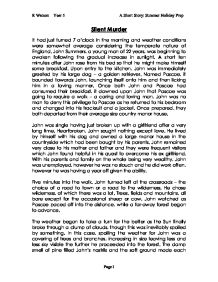 Silent Murder It had just turned 7 o'clock in the morning and weather conditions were somewhat average considering the temperate nature of England. John Summers, a young man of 22 years, was beginning to awaken following the gradual increase in sunlight. A short ten minutes after John rose from his bed so that he might make himself some breakfast. Upon entry to the kitchen, John was immediately greeted by his large dog - a golden retriever. Named Pascoe, it bounded towards John, launching itself onto him and then licking him in a loving manner. Once both John and Pascoe had consumed their breakfast, it dawned upon John that Pascoe was going to require a walk - a caring and loving man, John was no man to deny this privilege to Pascoe as he returned to his bedroom and changed into his tracksuit and a jacket. Once prepared, they both departed from their average size country manor house. John was single having just broken up with a girlfriend after a very long time. Heartbroken, John sought nothing except love. He lived by himself with his dog and owned a large manor house in the countryside which had been bought by his parents. ...read more.

However as Pascoe proceeded further towards John, John recognised the object being carried. John began yelling in a chronic manner: "HELP, SOMEBODY, HELP!" The object being carried was no stick. It was a large flexible material. The dripping was infact blood; the tissues within the large object are those of a human arm! The object being carried was the arm of a human corpse, no stick, and with this having dawned upon a somewhat horrified John, he began for help, startled. He grabbed for his mobile phone, however with trembling hands he struggled to grip it, the simple three digits '999' feeling as if forever to type in. The call began to connect, and after around five rings John was connected with the control office. "P- p- p- Police p-please," Stuttering due to a state of shock, John raised the alarm about the discovered arm and possible corpse. Taking control of Pascoe after having identified the area where he had made the discovery he stood and waited. Suddenly he smelt something sickly rotting as he felt the crisp wind touch his face. Breaking the silence, a snapping twig alerted John to the fact he was not alone. ...read more.

Then, just as John could make out the faint outline through the mist of the Police car with a ruddy officer anointing the vicinity as a crime scene, something hit him. He fell. Pascoe left his grip and ran off towards the officer who was now taping the area. John, endeavouring to return to his feet failed as yet again he was struck on his head. Looking up he saw a dark figure, a character of a man not so tall. He noticed it was the killer. For a third time John tried to rise to his feet again. And then the character looked down, his hand behind his back. John looked for his hand and then the character threw it forwards in a slicing motion. Still carrying the knife from the original murder, he slit the throat of John. Gasping for air, John tried to call for the Police but it was no good and then he slowly phased out, the skies darkened; the ground grew warm, the air floating with the musty smell of vegetation. A stream could be heard, but nothing else despite many Police vans now arriving. These were the last seconds of John's life. Suddenly he felt tired, and lying down again, John fell asleep...forever. ?? ?? ?? ?? R Watson Year 5 A Short Story: Summer Holiday Prep Page1 ...read more.