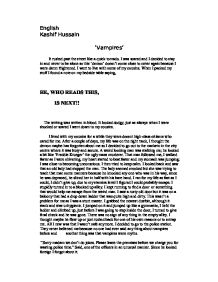 English Kashif Hussain 'Vampires' It rushed past the street like a quick tornado. I was scared and I decided to stay in and never to be alone so this 'demon' doesn't come close to never again because I were damn frightened. I went to live with some of my cousins. When I packed my stuff I found a note on my bedside table saying, HE, WHO READS THIS, IS NEXT!! The writing was written in blood. It looked dodgy, just as always when I were shocked or scared I went down to my cousins. I lived with my cousins for a while they were decent high-class citizens who cared for me. After a couple of days, my life was on the right track, I thought the demon maybe has forgotten about me so I decided to go out to the markets in the city centre where it was busy and secure. A weird looking man was stalking me; he looked a bit like 'Freddie Krueger' the ugly mass murderer. That man followed me, I walked faster as I were shivering, my heart started to beat faster and my stomach was jumping; I was close to becoming unconscious. I then tried to keep calm. I looked back and saw that an old lady had stopped the man. The lady seemed crooked but she was trying to teach that man some manners because he knocked any one who was in his way, since he was depraved, he sliced her in half with his bare hand. ...read more.

The cart controller rushed out of my way taking his horses by the bridles and whipping them vigorously so he would get away from the place really fast for some reason. I had decided to go through the alley abnormally, my mind was urging me to walk through the alley. Looking upwards I noticed that great thick clouds were drafting rapidly across the sky from north to south at a great height. There were signs of a coming storm in the stratum of the air. I was a little chilly, getting chillier as the snow began to fall. The sky grew darker and darker, and the snow fell faster and heavier, till the earth around me was glistening white. My feet sank deeper in the marshy grass. Then the wind grew stronger and blew around me with an incredible force. The air became colder, and in spite of my exercise I began to suffer. The snow was now falling so thickly and was whirling rapidly around me. I could hardly keep my eyes open. Every now and then the clouds were opened with vivid lightning, and in the flashes I could see ahead of me a great mass of trees partially coated in snow. Then of a sudden every thing stopped, the atmosphere was as usual, as if there was nothing wrong. I stopped, for there was a sudden stillness. The storm had passed; and my heart seemed to cease to beat. But this was only momentarily; there was an object before me it was a great massive coffin of marble, it had a gold plated scripture on to it that read. ...read more.

I got my self ready by closing up my wounds with my handkerchiefs and ran to a distance that I didn't know of, at this time I was hoping I were heading the right way, after minutes I were breathless, I saw my cart, I ran furiously to get to the destination before the Goddess could spot me. I reached my into my cart and thought that I'm one lucky girl, "Woo hooooooo!" But not for long when the goddess was right behind me. I pulled out the bazooka vulnerably and 'boom' missing her, I dropped the bazooka, as it was heavy. I showed her my fighting skills, but not for long when I had knocked her down. She had flown back, I wondered why; I thought this was the perfect chance for me to shoot her. I got my aim right and strike, whack and boom; I hit her forehead damaging her seriously. My shorts started to feel itchy. I checked them and saw that I had the amulet. I dropped it and she had splattered out in to sand grains. I tried to break it but was too weak so I used my shotgun. When I did this, the whole cemetery had been wiped out. All the coffins had gone, I thought to my self what a relief. I had returned to my own home, I did tell the folks the story but they just laughed and said stop dreaming. I was puzzled and tried too work out if it was real or just a dream and if it were real maybe I the amulet had given me the luck, power and skill. The end Kashif Hussain ...read more.