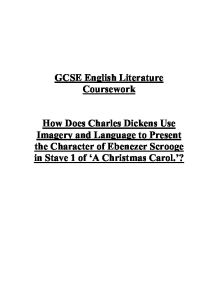 English Lit How Does Charles Dickens Use Imagery and Language to Present the Character of Ebenezer Scrooge in Stave 1 of 'A Christmas Carol.'?

Christmas is meant to be a time of joy and happiness to celebrate the birth of Jesus; however Scrooge sees Christmas as a waste of time and money: 'Merry Christmas! Out upon merry Christmas! What's Christmas time to you but a time for paying bills without money; a time for finding yourself a year older, but not an hour richer; a time for balancing your books and having every item in 'em through a round dozen of months presented dead against you?' Scrooge hates Christmas as he sees it as not a time for joy and happiness but as a time for paying bills without money. Scrooge's attitude towards Christmas is that he only wants to work throughout the festive period, as he is an obsessive business man. Scrooge is even extremely reluctant to allow his clerk, Bob Cratchit, one day off work for Christmas day. '...every idiot who goes about with 'Merry Christmas' on his lips, should be boiled with his own pudding, and buried with a stake of holly through his heart. He should!' This indicates that scrooge feels that every person who would be merry at Christmas time should be killed, these words are extremely emotive, however at times are meant to be a little humorous, Dickens uses this strong language to describe scrooges' personal attitude. Scrooge has a menacing affect on people around him. As scrooge is a mean man he would have a certain affect on most people, they appear to resent talking to him; 'Nobody ever stopped him in the street to say...'My dear Scrooge, how are you? When will you come to see me?' No beggars implored him to bestow a trifle, no children asked him what it was o'clock, no man or woman ever once in all his life inquired the way to such and such a place, of Scrooge. ...read more.

Scrooge eventually realises that if he does not change his ways he would end up living a sad and painful after life. The spirit of Christmas present shows Scrooge the hardship of life for the Cratchits and he feels sympathetic towards his clerk's son 'Tiny Tim'; 'Spirit', said Scrooge with an interest he had never felt before, 'tell me if Tiny Tim will live.' Scrooge has never felt the need to sympathise with someone who may not be able to survive, he is hopeful that Tiny Tim will live, this is another example of Scrooge changing as Dickens points out; '...with an interest he had never felt before', Scrooge has never felt any sympathy for the poor, his feelings was always strongly against poverty. The spirit of Christmas future scares Scrooge by showing him his own gravestone and the horrors that come with it. He promises the spirit that he will change his attitude towards Christmas and the poor for the benefit of himself and others. Scrooge sticks by his word and is ecstatic with joy in the morning, a sudden euphoria comes over scrooge; 'I am as light as a feather, I am as happy as an angel, I am merry as a school boy...' These similes show that Dickens portrays Scrooge to be as merry and joyful as other things, these similes portray the joy of Scrooge and show that he has consequently, changed for the good. In conclusion, I believe that Scrooge was a misanthropic miser, and later on realised the mistakes that he had made in life to become a better person. Charles Dickens used imagery and motive language to show the change of Scrooge and his different personalities. Scrooge realises that he had become overwhelmed by wealth and greed, and is now willing to rectify his problems. ...read more.

Scrooge is analysed in detail in this essay and there is a clear understanding of his character. At times points are repeated and sometimes a bit vague; it would have been possible to produce a more concise piece that would have been just as effective. A very focused title provided a good opportunity to look specifically at Dickens' language choices and at times these choices could have been explored in more depth and the exact language devices could have been identified and their effects considered.