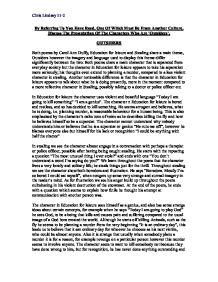 By Referring To You Have Read, One Of Which Must Be From Another Culture, Discuss The Presentation Of The Characters Who Are 'Outsiders'. OUTSIDERS Both poems by Carol Ann Duffy, Education for leisure and Stealing share a main theme, Outsiders however the imagery and language used to display this theme differ significantly between the two. Both poems share a main character that is separated from everyday society but the character in Education for leisure appears to take his separation more seriously; his thoughts even extend to planning a murder, compared to a less violent character in stealing. Another noticeable difference is that the character in Education for leisure appears to talk about what he is doing presently, more in the moment compared to a more reflective character in Stealing, possibly talking to a doctor or police officer etc. In Education for leisure the character uses violent and boastful language "Today I am going to kill something" "I am a genius". The character n Education for leisure is bored and restless, and so has decided to kill something. He seems arrogant and believes, what he is doing, i.e. planning murder, is reasonable behaviour for a human being. This is also emphasised by the character's calm tone of voice as he describes killing the fly and how he believes himself so be a superstar. The character cannot understand why nobody understands him or believes that he is a superstar or genius "He cuts me off", however he blames everyone else but himself for his lack or recognition "I could be anything with half the chance" In ...read more.

Stealing contains similar imagery however It is used to describe feeling and is at times equally strange "A mate with a mind as cold as a slice of ice within my own brain" this quote conquers up an almost icy pain in the reader. Again "His torso, frozen stiff, hugged to my chest, a fierce chill piercing my gut" also makes the reader fell as though they can fell the pain the character is enduring as he drags the stolen snowman home. The word hugged in this quote is also strange; a word which usually means something positive is used here to create some strange imagery. The form of both poems is also different however both successfully convey the feeling's of the characters. In Education for leisure s written in iambic pentameter and as so consists of longer sentences to tell the story of the character, however in stealing the poem is written in iambic tetrameter and consists of mostly shorter sentences which help give the poem a more sinister and calculating feel. "Midnight, he looked magnificent", "Boredom." and "A stranger's bedroom". This helps the poem convey the ominous tone which gives it its full effect. The character in each poem differs substantially, in Education for Leisure we see a desperate and sadistic character who enjoys causing pan and suffering to others and even goes so far as to plan a murder to get some attention and to be noticed and admired. In Stealing we see a childlike and innocent character in the first stanza; however this character develops into a sinister and ominous charter by the third stanza. ...read more.

"Once a fortnight, I walk the two miles into town for signing on". This quote proves to us that the character is unemployed and regularly has to walk into town to register for unemployment benefit. The character in Stealing seems to have no life either. He steals for fun, just because he gets thrill from it. "Sometimes I steal things I don't need" "Part of the thrill was knowing that children would cry in the morning. After having stolen the snowman the character somehow realises that this snowman that he has coveted is no more than lumps of snow. "Reassembled in the yard, he didn't look the same." The sound effects used in both poems are also interesting for example; in stealing the irregular rhymes and alliteration help focus the reader's attention. "Breath ripped out in rags". As was the case in Education for leisure there is also some very strange imagery in the reader's mind, for example "I'm a mucky ghost" which suggest that the narrator enjoys spoiling things, and "As cold as the slice of ice within my own brain" which almost suggests that the writer in emotionally frozen and completely oblivious to other people's feelings. He also continues to say that he doesn't really care about other people's feelings, especially those whom he steals off. He says "Part of the thrill was knowing children would cry in the morning. Life's tough". This quote shows us how selfish the character is, he does not care about causing pain and suffering to others. To conclude, it is obvious that although Education for Leisure and Stealing share common themes, there are vast differences to them. ?? ?? ?? ?? Chris Lindsay 11-2 ...read more.