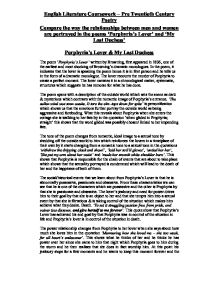 Compare the way the relationships between men and women are portrayed in the poems 'Porphyria's Lover' and 'My Last Duchess' Porphyria's Lover & My Last Duchess The poem 'Porphyria's Lover' written by Browning, first appeared in 1836, one of the earliest and most shocking of Browning's dramatic monologues. In the poem, it indicates that the lover is speaking the poem hence it is in first person and he tells us in the form of a dramatic monologue. The lover recounts the murder of Porphyria to create a perfect moment. The lover narrates it in a chronological matter, systematic, structures which suggests he has remorse for what he has done. The poem opens with a description of the outside world which sets the scene as dark & mysterious which contrasts with the romantic image of Porphyria's entrance. 'The sullen wind was soon awake, It tore the elm-tops down for spite' is personification which shows us that the emotions further portray the outside world as being aggressive and foreboding. What this reveals about Porphyria when she enters the cottage she is walking to her fate by in the quotation 'when glided in Prophyria; straight' this shows that the word glided was possibly chosen/ linked to her impending fate. The tone of the poem changes from romantic, ideal image to a s****l tone by shedding off the outside world to him which reinforces the lovers in a time/place of their own by it starts changing from a romantic tone to a s****l tone in the quotations 'withdrew the dripping cloak and shawl', 'laid her soil'd gloves', 'untied her her', 'She put my arm about her waist' and 'made her smooth white shoulder bare'. ...read more.

The poem 'My Last Duchess' written by Browning was written in the 19th Century but it was set in the 16th Century which links with the social & historical text that shows that the poem is a dramatic monologue. The poem was set out at the Dukes castle (Duke Ferrara) and that there is a picture gallery in the castle which has a staircase and that the Duke and his guests the Count and his envoy are looking at a portrait of the Duke latest Wife. In the poem 'My Last Duchess', it indicates to us that Duke Ferrara is speaking the poem, hences the fact that the poem is being spoken in first person form as a chronological dramatic monologue. Duke Ferrara is speaking to the envoy as this person is the representative for the Count as Duke Ferrara wishes to marry the Count's daughter. He intends to impress the envoy in the quotation 'The depth and passion of it's earnest glance, But to myself they turned (since none puts by the curtain I have drawn for you)' this shows that Duke Ferrara is arrogant and self absorbed by that he is drawing his emotion away because of his pride for status of being a Duke and the responsibility of his position also he is saying that he is keeping the curtain in front of the picture he has of her shut so no one can the see Duchess but himself. Also his sense of power comes back as he can say who can and cannot see her In the poem what ...read more.

or a possession to play with which means he has made her like him because he think is GOD. Throughout the poems 'Porphyria's Lover' and 'My Last Duchess' there has been a lot of similarities and differences between both of the poems. The similarities between both of the poems is that they both make a dominated society by that the male is the dominate one and the woman is the weak one. Also both poems have to be appreciated & understood in the time they were written as they were written in the Pre-Twetieth Century. Another similarity is that both poems make negative comments on the relationships between the male and female at the time & the abuse of power that is used at the time. Another one is that both women were killed by men to have control over them which links to social contrants by that both women are preserved in a moment by that Porphyria is preserved with her corpse, whereas, The Duchess is preserved in a painting of herself. Also they are in 1st person narratives and dramatic monologues The differences between both of the poems is that Porphyria is given much more of an identity, whereas the Duchess is more of an object than a person but they bother reslu in murder but Porphyria's murder is for the best intentions by the insane belief that her idyllic can be preserved also that she loves one person and one person only. However, the Duke murders the duchess as an act of cruelty to take control and the duchess dies because the Duke accuses the duchess of loving too many and not him. ?? ?? ?? ?? ...read more.