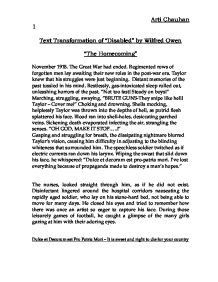 Arti Chauhan 1 Text Transformation of "Disabled" by Wilfred Owen "The Homecoming" November 1918. The Great War had ended. Regimented rows of forgotten men lay awaiting their new roles in the post-war era. Taylor knew that his struggles were just beginning. Distant memories of the past tussled in his mind. Restlessly, gas-intoxicated sleep rolled out, unleashing horrors of the past. "Not too fast! Steady on boys!" Marching, struggling, swaying, "BRUTE GUNS-They snipe like hell! Taylor - Cover me!" Choking and drowning. Shells mocking, helplessly Taylor was thrown into the depths of hell, as putrid flesh splattered his face. Blood ran into shell-holes, desiccating parched veins. Sickening death evaporated infecting the air, strangling the senses. "OH GOD, MAKE IT STOP.....!" Gasping and struggling for breath, the dissipating nightmare blurred Taylor's vision, causing him difficulty in adjusting to the blinding whiteness that surrounded him. The speechless soldier twitched as if electric currents ran down his larynx. Wiping the sweat that slid down his face, he whispered: "Dulce et decorum est pro-patria mori. I've lost everything because of propaganda made to destroy a man's hopes." The nurses, looked straight through him, as if he did not exist. Disinfectant lingered around the hospital corridors nauseating the rapidly aged soldier, who lay on his stone-hard bed, not being able to move for many days. ...read more.

Cold dread filled her veins. Time stopped as she stood there watching her barely recognizable husband, choking back her joy. Stephan began running to his father, hugging the roses in his hand, but his burst of speed halted. Flowers dispersed, like his lost hopes, as he stared at the shattered image of Taylor. He stumbled back and cowered behind Meg looking into Adam's eyes with bewilderment, searching for his brave hero. The little boy began to cry hysterically, gripping on to Meg's arms, but still in distress, she fell to the ground and wept. Stephan frantically ran as fast as his legs could carry him, locking himself in his room. Adam vaguely attempted to force his wheelchair with his invisible hand into the house, not aware of Mark pushing him. Silently he passed the frozen figure of his wife without a backward glance. Mark put the suitcase in the main bedroom and left quietly. Meg managed to walk in to the house, passing her sister who stood in total shock at the doorway. Youth - an impetuous naivety, unaware of reality. A little encouragement and Taylor had thought he was brave. Perhaps the biggest mistake he had made was signing up. Why? He still tried to comprehend why he had taken that action. ...read more.

Tony's eyes searched for where the fearful voice came from, passing straight through Adam. Suddenly, he glanced back at his friend, who blushed furiously. All the men had gathered around him, as if he was an object displayed in a museum. Angry at his own wretched appearance, Adam felt dejected. Each man's shadow towered over him, making him shrink in his chair. In spite of everything, he tried to pull himself together and managed a weak smile. That night, Meg and John lifted Adam on to his bed. It was strange for him to be dependent on others, especially on his wife who was so fragile herself. Taylor's drooping eyelids closed. Lush green grass surrounded him and a blazing sun sat in the sky. Mutely, greyness slid along. It crept up each blade of grass, slaughtering their existence. The sun twisted into a nightmarish form. A figure emerged from it like a ghost. Taylor's dead friend glided closer, as blood trickled down his chin. Closer and closer, until an inch from Taylor's face, a violent BANG blasted the soldier into smithereens. AARRGGHH!!! Adam's scream shook the house. Everyone rushed into the room. The defeated soldier couldn't move. Numbness in his lips stopped him from making a sound. Without warning, he retched the contents of his stomach. Distantly someone mopped his clammy face. WORD COUNT - 2,230 ...read more.