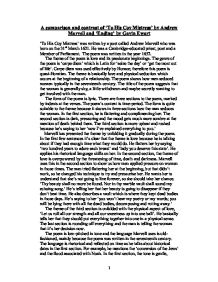 A comparison and contrast of 'To His Coy Mistress' by Andrew Marvell and 'Ending' by Gavin Ewart 'To His Coy Mistress' was written by a poet called Andrew Marvell who was born on the 31st March 1621. He was a Cambridge-educated priest, poet and a Member of Parliament. The poem was written in the year 1652. The theme of the poem is love and its passionate beginnings. The genre of the poem is 'carpe diem' which is Latin for 'seize the day' or 'get the most out of life'. Carpe diem was used effectively by Horace; therefore this poem is quasi-Horatian. The theme is basically love and physical seduction which occurs at the beginning of a relationship. The poem shows how men seduced women typically in the seventeenth century. The title of the poem suggests that the woman is generally shy, a little withdrawn and maybe secretly wanting to get involved with the man. The form of the poem is lyric. There are three sections to the poem, marked by indents at the verses. The poem's context is time-period. The form is quite suitable to the theme because it shows in three sections how the man seduces the woman. In the first section, he is flattering and complimenting her. The second section is dark, pressuring and the mood gets much more sombre at the mention of death behind them. The third section is more upbeat and rushed because he's saying to her 'now I've explained everything to you.' Marvell has presented the theme by unfolding it gradually during the poem. In the first few sentences it's clear that the theme is love because he is talking about if they had enough time what they would do. He flatters her by saying 'two hundred years to adore each breast' and 'lady you deserve this state'. He applies his rhetorical language skills on her. In the second section, the theme of love is overpowered by the threatening of time, death and darkness. ...read more.

Iron gates have the strength to keep and confine people, so the male speaker is saying that they should make love and push the gates wide open. In conclusion, this is a passionate poem showing how men seduced women by using the idea of death and time. I particularly like the way Marvell personifies time as a chariot approaching from behind and in my opinion this is a well-written and detailed poem. 'Ending' is a poem written by Gavin Ewart. He is poet who was born in London in the year 1916 and died in 1995. Ewart came from a Scottish background and he wrote the poem in the 1970's. Ewart was Cambridge-educated and he became a poet before the Second World War. The poem is different to other love poems because the theme of it is the ending of a relationship, not the beginning. The title is only the word 'Ending', without the word 'The' in front. By doing this, Ewart gives the poem a sense of finality. The poem has fourteen lines; however, it is not a sonnet. There are eight or nine syllables per line. The poem is written in seven rhyming couplets. There is no particular setting for the poem, but there is only a male speaker talking through the past of relationship. Ewart has chosen to construct the poem in rhyming couplets, for instance, 'the kisses that were as hot as curry are bird-pecks taken in a hurry.' The poem is made to unfold gradually before the reader. Ewart does this by developing the same idea for each couplet. The first line in each couplet talks about how the relationship was when it first started. The second line in each couplet compares the first to how the situation is now (the relationship about to end). For example, 'the feet that ran to meet a date' is the first of the couplet, and the second is 'are running slow and running late.' ...read more.