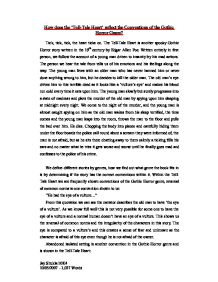 How does the 'Tell-Tale Heart' reflect the Conventions of the Gothic Horror Genre? Tick, tick, tick, the heart ticks on. The Tell-Tale Heart is another spooky Gothic Horror story written in the 19th century by Edgar Allen Poe. Written entirely in first person, we follow the account of a young man driven to insanity by his mad actions. The person we hear the tale from tells us of his emotions and his feelings along the way. The young man lives with an older man who has never harmed him or never done anything wrong to him, but he decides to kill the older man. The old man's eye drives him to this terrible deed as it looks like a 'vulture's eye' and makes his blood run cold every time it sets upon him. The young man slowly but surely progresses into a state of madness and plots the murder of the old man by spying upon him sleeping at midnight every night. ...read more.

Abandoned isolated setting is another convention in the Gothic Horror genre and is shown in the Tell-Tale Heart: "Amid the dreadful silence of that old house" An abandoned setting is frequently used as a setting in the Gothic Horror genre as it easy to use this setting to create an atmosphere of danger, fear and concern. The Victorians are reflected in this convention as they were feeling abandoned and isolated after their beliefs and religion had been purposely ripped to shreds by science proving them wrong. Another convention is high emotion: "Very, very dreadfully nervous" We see that the narrator here is very nervous showing us his high emotions within the story and giving an atmosphere of fear. As it is told in first person we, the readers, are affected by the nervousness of the main character and in the story it creates an atmosphere of fear, nervousness and anxiousness. The Victorians were very nervous at the time of the crisis and were probably in a state of high emotion. ...read more.

For my last convention it will be dangerous omens: "All in vain; because Death, in approaching him had stalked him with his black shadow before him..." From this quotation we can feel a sense of someone being hunted or stalked, in this case it would be the man being hunted down by death and taken from the world. Atmospherically it would create fear and paranoia, as the feeling of getting pursued by an unknown person or being would be chilling and creepy. The Victorians could be represented as the people being stalked and science would be the stalker or hunter, as they were pursuing religion of the people and destroying it with their logical theories. The Tell-Tale Heart truly is a Gothic Horror story. With the conventions of Gothic Horror found within the story nearly every line you read, Edgar Allen Poe wrote an amazing, gripping and scary story in the 19th century, this story was called the Tell-Tale Heart. ?? ?? ?? ?? Jay Shukla 10K4 10/05/2007 - 1,027 Words ...read more.