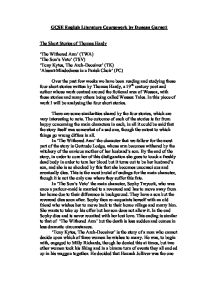 GCSE English Literature Coursework by Duncan Garnett The Short Stories of Thomas Hardy 'The Withered Arm' (TWA) 'The Son's Veto' (TSV) 'Tony Kytes, The Arch-Deceiver' (TK) 'Absent-Mindedness in a Parish Choir' (PC) Over the past few weeks we have been reading and studying these four short stories written by Thomas Hardy, a 19th century poet and author whose work centred around the fictional area of Wessex, with these stories and many others being called Wessex Tales. In this piece of work I will be analysing the four short stories. There are some similarities shared by the four stories, which are very interesting to note. The outcome of each of the stories is far from happy concerning the main characters in each, in all it could be said that the story itself was somewhat of a sad one, though the extent to which things go wrong differs in all. In 'The Withered Arm' the character that we follow for the most part of the story is Gertrude Lodge, whose arm becomes withered by the witchery of the envious mother of her husband's son. By the end of the story, in order to cure her of this disfiguration she goes to touch a freshly dead body in order to turn her blood but it turns out to be her husband's son, and she is so shocked by this that she becomes unconscious and eventually dies. ...read more.

This may well be because women of the time were very much considered to be the inferior of men, they were the property of either their father of their husband. In both cases they have married someone of a dignified status and had some kind of disfigurement, in the case of Sophy before her marriage and in the case of Gertrude afterwards. For both their disfigurement has proved to be a major obstacle for them, and in the end proved to be crucial in their death. Sophy also shares some likeness to Rhoda Brook from 'TWA', in the fact that they have both been denied the man they desire by some means. For Rhoda she could not marry Farmer Lodge and for Sophy she could not wed Sam Hobson. There are also similarities between Randolph Twycott (the son) from 'TSV' and Tony Kytes. Both characters have a certain arrogance, which makes them believe they have the right to decide the fate of certain women in their lives. For Randolph it proved that he did have a dominion over his mother, who despite her will was told that she could not re-marry someone of a lower class than himself, a priest. Despite his obvious charm, Tony Kytes's arrogance proved his downfall in his quest to find the right woman for him. ...read more.

they are addressing). In 'TK' & 'PC' it is also written in the third person but there is an actual person telling the story from his perspective rather than from a broad perspective. Hardy's reason for writing these stories, and for making them mainly negative stories is, in my opinion, to voice his views on certain subjects. Also I think he wished to portray life in a real sense rather than showing it to be constantly happy like in so many other stories. In 'TWA' and 'TSV' he is displaying his opposition to some prejudices by showing the problems caused by such social and sexual discrimination. There is an element of witchcraft and sorcery in 'TWA' but I do not believe Hardy is really giving his opinion on the validity of such beliefs, more that he is including it as this would draw people to reading the story. The message intended in 'TK' is not to treat women as objects. This is clearly conveyed again by his showing the consequences of such action. In 'PC' he may well not be trying to teach the reader any lessons as it is meant as a light-hearted story and not a serious display of freedom of expression. There are more likenesses between 'TWA' and 'TSV' than the other short stories although 'TK' and 'PC' do share some similar elements. I enjoyed studying the work of Thomas Hardy as even though they were not the most pleasant natured of stories, as they showed realism and had good messages behind them. ...read more.