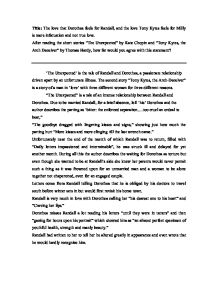 Title: The love that Dorothea feels for Randall, and the love Tony Kytes feels for Milly is mere infatuation and not true love

Title: The love that Dorothea feels for Randall, and the love Tony Kytes feels for Milly is mere infatuation and not true love. After reading the short stories "The Unexpected" by Kate Chopin and "Tony Kytes, the Arch Deceiver" by Thomas Hardy, how far would you agree with this statement? 'The Unexpected' is the tale of Randall and Dorothea, a passionate relationship driven apart by an unfortunate illness. The second story "Tony Kytes, the Arch-Deceiver" is a story of a man in 'love' with three different women for three different reasons. "The Unexpected" is a tale of an intense relationship between Randall and Dorothea. Due to be married Randall, for a brief absence, left 'his' Dorothea and the author describes the parting as 'bitter: the enforced separation....too cruel an ordeal to bear," "The goodbye dragged with lingering kisses and signs," showing just how much the parting hurt "More kisses and more clinging till the last wrench came." Unfortunately near the end of the month of which Randall was to return, filled with "Daily letters impassioned and interminable", he was struck ill and delayed for yet another month. During all this the author describes the waiting for Dorothea as torture but even though she wanted to be at Randall's side she knew her parents would never permit such a thing as it was frowned upon for an unmarried man and a woman to be alone together not chaperoned, even for an engaged couple. ...read more.

Tony appears weak as she talks to him asking if he did not think her pretty. 'He let his eyes light upon her for a long while. "In fact, I never knowed you was so pretty before!"' But when she asks if she is prettier than Milly he does not reply as over the hedge past turning he sees the feather he knew well- the feather in Milly's hat. Tony persuades Unity to hide in the back of the wagon "Now dearest Unity, will ye, to avoid all unpleasantness, which I know ye cant bear any more than I, will ye lie down in the back of the wagon till Milly has passed?" Tony knows that it's wrong for him to be seen with another woman rather than his fianc� in public. When Tony sees Milly she does not ask for a ride. Tony lies saying he thought she was going to see her mother not waiting for him. They talked until they reached a house and who is looking out the window but Hannah Jolliver, another young beauty of the place at that time, and the first woman Tony had fallen in 'love' with. Described as much more dashing girl than Milly Richards, thought Tony had not thought of her late. ...read more.

"Losing all semblance of what had been" is how Dorothea phrases her emotions; this appears to be a common theme throughout both extracts, In other words the fickleness of love. In both stories the 'love' is lost in different ways, but this love however was based on appearance rather than true love. In my opinion in the first extract Randall and Dorothea have a passionate relationship until there forced to separate and Randall become ill. The relationship isn't based on money as Dorothea refused to stay with him "Never," she whispered "not for all his thousands! Never, never! Not for millions!" It's true that Randall changed in appearance but if Dorothea had really truly loved him she would never has left him no matter what he looked like when he was ill. But if it were reversed would Randall have still loved Dorothea if her looks had changed. If it were true love it would not matter what they looked like but to Dorothea it certainly did and so I believe it is mere infatuation rather than true love. With Tony Kytes, he seems to like all three girls for three different reasons, he can't have just one he wants them all and he's confused about who he should choose he knows that its wrong but he does it anyway, and to me he seems to see the women as objects rather than actual living breathing people. Overall it most diffidently seems to be infatuation rather than true love. ...read more.