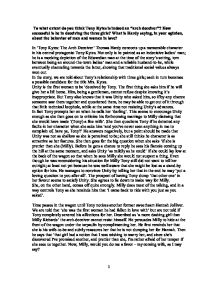 To what extent do you think Tony Kytes is indeed an &quot;arch deceiver&quot;? How successful is he in deceiving the three girls? What is Hardy saying, in your opinion, about the behavior of men and women in love?

To what extent do you think Tony Kytes is indeed an "arch deceiver"? How successful is he in deceiving the three girls? What is Hardy saying, in your opinion, about the behavior of men and women in love? In 'Tony Kytes: The Arch Deceiver' Thomas Hardy concocts up a memorable character in his central protagonist Tony Kytes. Not only is he painted as an indecisive ladies' man; he is a mocking depiction of the Edwardian man at the time of the story's setting, torn between being an around-the-town ladies' man and a reliable husband-to-be, while eventually channeling towards the latter, showing that traditional social values always won out. In the story, we are told about Tony's relationship with three girls; each in turn becomes a possible candidate for the title Mrs. Kytes. Unity is the first woman to be 'deceived by Tony. The first thing she asks him if he will give her a lift home. Him, being a gentleman, cannot refuse despite knowing it's inappropriate. But Tony also knows that it was Unity who asked him, so if by any chance someone saw them together and questioned them, he may be able to get out of it through that little technical loophole, while at the same time not resisting Unity's advances. ...read more.

First he asks Hannah, who refuses as she is in her father's presence, next Unity is asked but is offended at being a second choice. Milly, despite being the third and last choice accepts, ending the story with where she started. Tony knows very well that marriage would tie him down to just one woman for the rest of his life. Unlike now, divorce was a myth and adultery was punishable by law. An open-minded reader would perhaps understand Tony's dilemma; what if he married the wrong girl? So he is naturally concerned that he marries the right person. At the start of the story we are told that he 'got fixed down to one in particular' but as soon as he gets the notion that he may have other options when Unity flirts with him Tony is willing to take the chance and play on with her. But when he sees Milly, Tony is unwilling to take the chance of loosing her so he prefers to keep her as a reserve by not offending her by riding with another woman. The structure of the story is fairly straight forward; it employs a love triangle between Tony and the three women. Unity is portrayed as a temptress in the story, who entices to lure Tony away from Milly into her arms. ...read more.

To put it simply had Unity lacked her coquettish charm it is very unlikely that Tony would have given her a second chance, let alone a first one. The exact same thing can probably be said for Hannah, whom Tony unwittingly chases despite having his fianc�e in his presence and a former sweetheart to whom he just renewed his affections. In conclusion, we can say that Hardy portrays Tony in two different lights. To an outsider, Tony can be summed up as a deceiving womanizer, but with insight the reader will find out that the only person who is really deceived is Tony himself. His actions at the start were honorable but he naively thought that he could have both ends of the agreement. As a result, he confused himself by not knowing what he wanted; he wove an intricate web of lies and presumptions to hide behind while not fully understanding the consequential dangers he was subjecting himself to. As for the relationship between two sexes, Hardy successfully portrays the miscommunication between the two and the mind game that women sometimes play. For example Unity manages to make Tony re-consider his position towards Milly, and no doubt she made the job easier for Hannah too. Hardy stresses the point that when in love communication is even more difficult because of the more delicate emotions involved. By Omar Omar Y10A English Pre-1914 Prose Assignment Word count: 2,300 ?? ?? ?? ?? 1 ...read more.