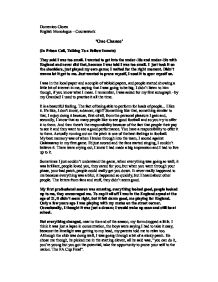 Domenico Clores English Monologue - Coursework 'One Chance' (In Prison Cell, Talking To a Fellow Inmate) They said I was too small. I wanted to get into the under-18s and under-19s with England and never did that, because I was told I was too small. I just took it on the shoulders, just played my own game; I waited for the right moment. Didn't wanna let it get to me. Just wanted to prove myself, I used it to spur myself on. I was in the local paper and a couple of tabloid papers, and people started showing a little bit of interest in me, saying that I was going to be big. I didn't listen to him though, if you know what I mean. I remember, I was asked for my first autograph - by my Grandad! I used to practise it all the time. It is a beautiful feeling. The fact of being able to perform for loads of people... I like it. It's like, I don't know, a dancer, right? Something like that, something similar to that, I enjoy doing it because, first of all, from the personal pleasure I gain and, secondly, I know that so many people like to see good football and so you try to offer it to them. ...read more.

How? I felt dizzy and sick. My knees went weak. The judge walked out of the room. I lost all sense of time and space. The room was hazy. I needed a f*g! I stopped smoking along time ago, just before I turned professional. I had absolutely no idea it was coming, I didn't think it would have been that bad, a few years at the most. I felt so small, the world was against me. But whatever the whys and wherefores, I now found myself in big, big trouble. My head wouldn't stop spinning. I was going to jail. It really hadn't sunk in. Having a pair of handcuffs clamped around my wrists soon sorted that out. But it was still difficult to comprehend. I'd never been in trouble with the police before, never broken the law. I lay in my cell, thinking, why was this brought on, I was doing so well. Everyone in prison hated me, they detested me, but why, I was in for the same thing as they were. Doc said, "they despised me, you had it all, everything they ever dreamed of. And then you threw it away". Everywhere I went I was cornered off by someone, all of them, all having a go. I was sick of it. ...read more.

The register of the monologue is incredibly informal because of the common inclusion of the word 'I' as the monologue is first person orientated. For example, 'I knew I had made a big impression and I had to live up to it'. And, 'I just couldn't understand the game'. Furthermore, contractions, 'couldn't' and 'didn't' were frequently used throughout the monologue. They in a sense indicate how spontaneous the monologue is, as they consist of on the spot thoughts and feelings. If these words were not contracted, and would have been, 'could not' and 'did not', the monologue would have been more formal. Although the monologue is informal, there is not a vast amount of colloquialisms used; only the odd word like, 'wanna'. But the odd phrase, adds naturalness to the monologue, it makes it more genuine. I feel that I have been very successful in creating a monologue in the style of Alan Bennett; it is difficult to recreate a classic Bennett character and write about life's everyday situations. In my personal monologue I have included and touched upon most of Bennett's conventions and I haven't moved away from them. Like all Bennett characters, Mr. Meehan comes off badly, and generally we leave the monologue feeling immense sympathy for him, but at the same feeling frustrated at what he done to get himself in this situation. ...read more.