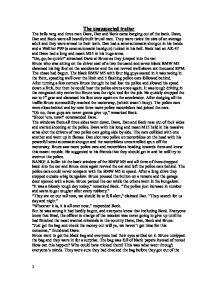 The unsuspected traitor The bells rang and three men Dave, Dan and Beck came barging out of the bank. Dave, Dan and Beck were all heavily built brutal men. They were twice the size of an average adult and they were armed to their teeth. Dan had a semi automatic shotgun in his hands and a Walther P99 (a semi automatic handgun) tucked in his belt. Beck had an AK-47 and Dave had a long and mean M15 in his huge arms. "Go, go, be quick!" screamed Dave at Bruce as they jumped into the car. Bruce who was sitting on the driver seat of a two thousand and seven black BMW M5 slammed his big foot on the accelerator and the car revved well above six thousand RPM. The chase had begun. The black BMW M5 with four big guys seated in it was racing in the front, speeding well over the limit and 5 flashing police cars followed behind. After turning a few corners Bruce thought he had lost the police and slowed his speed down a little, but then he could hear the police sirens once again. It was tough driving in the congested city center but Bruce was the right tool for the job. He quickly dropped the car to 1st gear and slammed his foot once again on the accelerator. ...read more.

They grew up in the streets and one day they met another orphan called Bruce and they become really good friends. They use to live by begging from people in the streets because they had no one to look after them. One day a really high classed person came to them when they were all around the age of fourteen years old. He told them that he will give them a nice home to live in, and they will be given good food as well. Dave denied his invitation because he knew that the man was none other than Edward the godfather. He knew that his works were bad and evil. Bruce who was a quiet but a greedy person persuaded his friends to join Edward and they agreed with him after many arguments. The godfather's intention was obviously to use them for his dirty works and after the first robbery the greed for money fell in their hearts and they started to adapt the bad ways of Edward. Dave, Dan and Beck still had a little feeling at the back of their hearts that they were going to do something bad that they will regret later and that is what happened exactly. Once when Bruce was sent to threaten someone for not paying money to the godfather, Beck, Dan and Dave were sent to kill a woman named Michael because she had been causing problems in the godfather's gang. ...read more.

The gang's skilled driver Bruce wasn't there to help them dodge the police. The police shot their car and the Porsche went out of control but luckily it stopped after a few spinning and Dave, Beck and Dan ran out of the car. They did their best to fight but as you know crime pays its price and they were all killed by the fearless police officer, Brad. The news was on every channel, every newspaper and every street of the country. The most wanted criminals were killed. Bruce was watching the television with Edward and laughed at the stupidity of his friends. He had betrayed his friends for money, he had made them come towards the criminal world, and he had helped Edward use them for the last and the biggest robbery in their life and then to take the money of them. He had to pay for this. Someone had to kill him and the godfather. That someone was always at their tail, and he will not stop until he had finished the godfather and Bruce. This story shows us that it does not matter who tells you to follow the bad path you should not follow it. You should not listen to your friend if they insist you to follow the bad path especially if you know it is the bad path because you are surely to regret later. Crime pays for its price. THE END ?? ?? ?? ?? 1 ...read more.