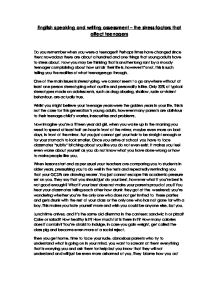 English speaking and writing assessment - the stress factors that affect teenagers Do you remember when you were a teenager? Perhaps times have changed since then; nowadays there are about a hundred and one things that young adults have to stress about. Now you may be thinking that is another long rant by a moody teenager complaining about how unfair their life is, however it's not, this is such telling you the realities of what teenagers go through. One of the main issues is stereotyping, we cannot seem to go anywhere without at least one person stereotyping what our life and personality is like. ...read more.

It makes you feel even worse about yourself as you do not know what you have done wrong or how to make people like you. When lessons start and as per usual your teachers are comparing you to students in older years, pressurising you to do well in the tests and repeatedly reminding you that your GCSEs are drawing nearer. You just cannot escape this academic pressure set on you. They say that you should just do your best, however what if you're best is not good enough? What if your best does not make your parents proud of you? You hear your classmates telling each other how drunk they got at the weekend; you're wondering whether you're the only one who does not ...read more.

They blame how you act towards them to hormones and bad attitude, when really it's down to them; their constant comparing, shouting and criticising. This is just a minute part of a teenage girl's life; now imagine you have to go through this every single day. The real difficult thing to grasp is however, is that issues much older people go through seem to be happening to younger and younger people. So just think before you judge or stereotype a teenager you see, think about what they could be going through and if you were in their shoes how you would be feeling. ...read more.

The task set here is a Writing to Argue task, and the candidate makes a well-structured argument for the pressures of teenage life to be considered by those that often overlook it. There main target is parents, and although this ...

The task set here is a Writing to Argue task, and the candidate makes a well-structured argument for the pressures of teenage life to be considered by those that often overlook it. There main target is parents, and although this example is subjected to intergenerational changes, it would not be right to assume that they are completely clueless as to some of the stresses that face the younger generation - they have, after all, gone through something similar even if a long time ago. I(t would also be a good idea to consider not branding them "obnoxious" and "oblivious" if the apparent disclaimer at the beginning of the answer didn't say that the answer wouldn't be a "rant" from a "stroppy teenager, as that is what this effectively spirals into. It should be advised that candidates must not contradicts themselves as this loses the potency of the argument.

The Level of effective arguing here is moderate, though a lot is not as effective as it could be due to a miscomprehension of what are required in arguments. There is a poor use of statistics, which is quite counter-productive, if anything, and paints teenagers is a very bad light. A better one focusing on maybe how many stress-related illnesses are diagnosed in young adults between the ages of 13 and 19 might have been more appropriate. Other parts of the analysis that could be improved are the use of voice of authority. These don't necessarily need to be factual, but they strengthen an argument on the basis that it looks like the candidate has conducted external research and has consulted a professional on the matter of the argument.

The Quality of Written Communication (QWC) is average, and there does not seem to be a very good grasp of how to coherently construct a sentence that follow grammatical standards. This should be rectified by practising how to write a variety of sentence lengths with a variety of complex punctuation. This will help show the examiner more confidence and enthusiasm for written expression and will improve the QWC mark.