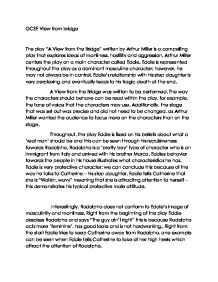 GCSE View from bridge The play "A View from the Bridge" written by Arthur Miller is a compelling play that explores ideas of manliness, hostility and aggression. Arthur Miller centers the play on a main character called Eddie. Eddie is represented throughout the play as a dominant masculine character; however, he may not always be in control. Eddie's relationship with his step daughter is very perplexing and eventually leads to his tragic death at the end. A View from the Bridge was written to be performed. The way the characters should behave can be read within the play, for example, the tone of voice that the characters may use. ...read more.

Eddie is very protective character; we can conclude this because of the way he talks to Catherine - his step daughter. Eddie tells Catherine that she is "Walkin, wavy" meaning that she is attracting attention to herself - this demonstrates his typical protective male attitude. Interestingly, Rodolpho does not conform to Eddie's image of masculinity and manliness. Right from the beginning of the play Eddie despises Rodolpho and says "The guy ain't right" this is because Rodolpho acts more 'feminine', has good looks and is not hardworking.. Right from the start Eddie tries to keep Catherine away from Rodolpho, one example can be seen when Eddie tells Catherine to take of her high heels which attract the attention of Rodolpho. ...read more.

This occurs when Marco challenges Eddie's manliness. Furthermore, the way the female characters are represented throughout the play have little affect on the way the masculine characters behave. At the end of the play Beatrice (Eddie's wife) says "whatever happened we all done it, and don't you forget that Catherine" In my opinion I believe that Beatrice and Catherine have some responsibility for the tragedy because they are part of Eddie's everyday life, especially Catherine. Alfieri is one of the characters within the play, and also as narrator, commenting on the action and foretelling the final tragedy. Alfieri is a character of very high stature and very clever when Eddie goes to him, he gives Eddie good choices, however, Eddie choose not to listen to Alfieri, therefore, suffers for his choice. Alfieri uses, thoughtful, educated ideas also sometimes showing black humour. ?? ?? ?? ?? ...read more.